[ The Korea Herald – Send E-mail ]
New literature translation award to match global sensibilities
By Joel Lee
Published : Jul 27, 2017 - 17:31
Updated : Jul 30, 2017 - 13:22
Before the 1990s, translating Korean literature was spearheaded by the government, with local translators and professors churning out writing largely considered anachronistic, nationalistic and out of sync with Western sensitivities.

Amid the country’s efforts to catapult its literature to the world stage, the Global Korean Literature Translation Award, organized by the GKL Foundation, was launched Thursday with the goal of bringing works closer to global sensibilities through enhanced cultural and linguistic interpretation.

The foundation is the corporate outreach arm of Grand Korea Leisure Co., a government-run tourism company that operates Seven Luck casinos around the country.

“The newly created award will be a welcome addition to Korea’s three existing literature translation accolades -- those awarded by the Literature Translation Institute of Korea, Daesan Foundation and Korea Times -- but will have a different approach, focusing on the young and emerging readers,” said professor Lee Young-jun of Kyung Hee University in Seoul, one of the executive members of the organizing committee, at a press conference Thursday. 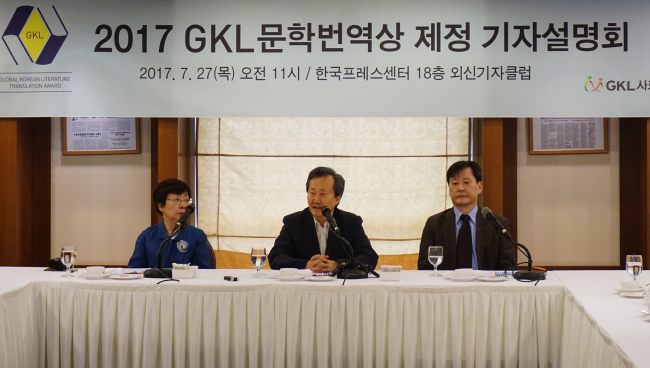 (From left) The Korea Heritage Education Institute President Joanne Ji-myung Kim, GKL Foundation Chairman Lee Duk-joo and professor Lee Young-jun of Kyung Hee University speak at the Korea Press Center in Seoul on Thursday. (GKL Foundation)
“New generations worldwide are attracted to K-pop, Korean television dramas and movies,” said Lee. “Their interests, for the most part, lie in contemporary literature, thus we need to focus on what goes on around the Hongik University in Seoul, as an example,” he said, as the area teems with youngsters letting out their youthful exuberance through busking, clubbing and art.

Noting Japanese imperial saga of seduction “The Tale of Genji” has been translated five times over the last eight decades -- with great differences between the first and last in terms of translation styles -- Lee said that properly translating Korean classics like “The Story of Hong Gildong” or “The Tale of Chunhyang” in line with modern nuances was also of paramount importance.

Highlighting Korean author Han Kang’s novella “The Vegetarian,” which won the Man Booker International Prize after being adapted into English by British translator Deborah Smith, the scholar stressed that the British award gave equal prize money to both the novelist and translator, a recognition of the importance of translation.

Joanne Ji-myung Kim, president of the Korea Heritage Education Institute tasked with organizing the annual event, said the committee pays keen attention to both the translators of Korean literature as well as dominant trends across Western publishing industries, adding they strive to liaison successful works with major publishers.

Applications will be accepted from Tuesday through Sept. 30 in various genres, including full-length novels, short stories and poems. The target language for this year is limited to English.

Submitted works will be judged by a panel of professional writers, editors, publishers and internationally acclaimed novelists, largely from the United Kingdom, United States and other English-speaking countries.

Three winners of the Global Korean Literature Translation Award will be announced in November. The top winner receives a cash prize of 20 million won ($18,000), followed by prizes of 7 million won and 5 million won for runners-up.