[ The Korea Herald – Send E-mail ]
Senior employment rate up 1.1% in May
By Catherine Chung
Published : Jul 25, 2017 - 14:59
Updated : Jul 25, 2017 - 14:59
The employment rate of senior citizens in South Korea gained ground in May from a year earlier as a growing amount remained in the job market or sought work amid the rapidly aging population, government data showed Tuesday.

The employment rate of those aged between 55 and 79 reached 54.8 percent as of May, up 1.1 percentage points from a year ago, according to the data compiled by Statistics Korea. 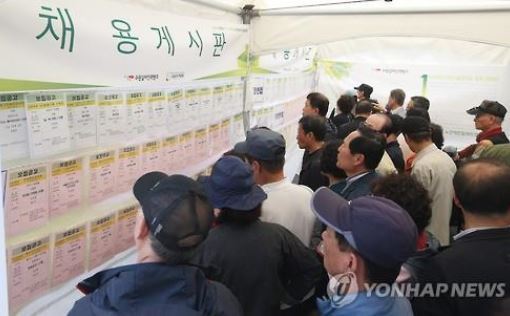 (Yonhap)
Their economic activity rate also rose 1.1 percentage points to 56.2 percent over the same period, with the total senior population increasing 4.2 percent on-year to 12.9 million, accounting for 29.5 percent of the country's total population.

The senior employment rate has been on a rise, hitting 48.9 percent in 2009 in the aftermath of the global financial crisis.