The tally of Chinese visitors came to 254,930, down 66.4 percent from 758,534 recorded the previous year, according to the data by the Korea Tourism Organization.

The combined number of Chinese visitors in the January-June period stood at 2.25 million, down 41 percent from 3.81 million tallied in 2016, it said. 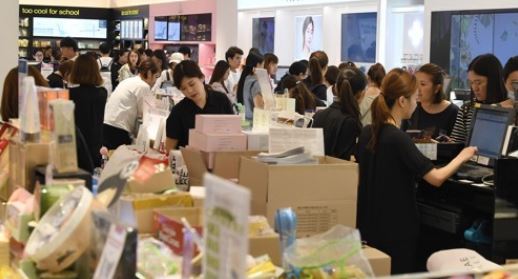 This photo, taken on June 20, 2017, shows a duty-free store in central Seoul crowded with tourists. (Yonhap)
The sharp decline in Chinese tourists has been widely expected as Beijing has banned its travel agencies from selling trips to Korea since mid-March, in an apparent retaliation over Seoul's deployment of the US Terminal High Altitude Area Defense.

The ban, which has wrecked havoc on South Korean firms, especially the retail and duty-free sectors, has yet to be lifted.

Chinese visitors accounted for nearly half of some 17 million foreigners into the country last year.

The number of outbound nationals, meanwhile, recorded 2.09 million in June, up 18 percent from the previous year, the KTO said. (Yonhap)