For the next year, the government expects the economy to pull off around 3 percent growth, according to the new economic policy plan endorsed by the Cabinet.

"In 2017, the economy will likely grow an improved 3 percent on the back of an upturn in exports and investment and fiscal expansion brought on by the supplementary budget," the Ministry of Strategy and Finance said in a statement. "In 2018, it is projected to be at 3 percent on extended jobs and increased income, despite a downturn in investment."

Consumer prices are expected to gain 1.9 percent this year, up sharply from the previous year's 1 percent, with the current account contracting to $72 billion from $98.7 billion due to increased imports and a drop in the number of foreign tourists. 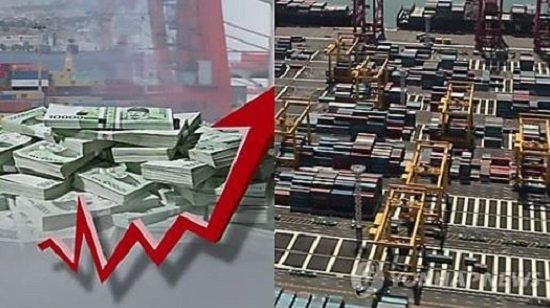 (Yonhap)
The finance ministry explained that the 11 trillion won ($9.87 billion) supplementary budget that will focus on job creation and social welfare expansion will help the economy reach 3 percent growth for the first time in three years.

"We see the extra government spending will help the economy move up by 0.2 percentage point," Deputy Finance Minister Lee Chan-woo said in a press conference held last Friday. "We will safely reach the 3 percent target when we improve our economy through an income-led growth system."

But it is still more optimistic than other international organizations and private institutions. The International Monetary Fund forecast that the South Korean economy will gain 2.7 percent this year, and the Organization for Economic Cooperation and Development expected 2.6-percent growth, while global investment bank Moody's revised its growth outlook to 2.8 percent.

The upward revision by the Seoul government came as the economy has been showing some signs of recovery thanks to stellar outbound shipments.

The country's exports, a key economic driver, have remained in positive territory for eight straight months since November last year on booming trade and rising oil prices, a dramatic turnaround from an 8-percent plunge in 2015 and a 6-percent fall in 2016.

Overseas demand for Korea-made semiconductors pushed up not only the numbers of exports but also corporate facility investment, while construction investment has been on a roll thanks to the demand spike in the real estate market.

At the same time, political uncertainties that had clouded the country for months sparked by the impeachment of former President Park Geun-hye were diminished after liberal President Moon Jae-in took office in May.

The "income-led growth" principle is Moon's policy principle that is similar to the concept of inclusive growth. This means economic growth that creates opportunities for all segments of the population and distributes dividends of increased prosperity, both in monetary and non-monetary terms, fairly evenly.

The president has said that the government will run various job-creating policies throughout his five-year term to increase the income of young people, temporary workers, and small and mid-sized enterprise employees.

In order to play a stronger role in boosting the economy, the finance ministry said it will manage the growth pace of fiscal spending faster than that of nominal GDP in the coming five years.

Also, the government will also put risk management on the front burner to bring mounting household debt, which amounted to nearly 1,400 trillion won, under control through the tightening of bank loan screening procedures.

Finance Minister Kim Dong-yeon said the new government's economic policy plan is focused on people, not businesses, which have led the economic development for the past decades in Asia's fourth-largest economy. This shift, he said is to make it possible for the country to deal with the current trend of low growth and polarization of wealth.

"The new economic paradigm starts with people," Kim said in an official press conference held in Seoul, adding that the government plan is aimed at creating a virtuous circle of growth, distribution, jobs and income.

As household spending will be the new growth momentum of the economy, the government will raise the minimum hourly wage to 10,000 won from the current 6,470 won, and offer a variety of subsidies to lessen income disparity.

In line with the income-led growth scheme, the government's new taxation policies and economic tools, including social welfare and education subsidies, will be redesigned to place priority on creating jobs and redistributing income in a way that eases the polarization.

The government will offer expanded financial support to people in accordance with the stages of their life cycle to help households have more income and spend more.

Babies aged between zero to five will be given 100,000 won every month, and young people who are between jobs will be granted a monthly 300,000 won in unemployment benefits, while the government will increase senior benefits to elderly people in the lowest income bracket.

Also, the government will ease the burden for low income families with children receiving secondary education, while expanding scholarship programs in the university stage.

In order to boost private consumption, the government is considering extending public holidays and even support some vacation bonuses through setting up a separate fund.

Businesses that hire more young people and reduce temporary workers will have tax credits of up to 10 million won per person, while unfair trading practices will face toughened punishment. (Yonhap)