US Senate Lobbying Disclosure Database showed that tech giant Samsung Electronics spent $1.47 million on lobbying activities in the first half of this year, triple the $490,000 spent in the same period in 2016. The total this year breaks down to $680,000 in the first quarter and $790,000 in the second. The company's lobbying fund in the US last year was $1.37 million.

Samsung cited numerous trade issues as subject of lobbying, such as the South Korea-US free trade agreement, North America free trade agreement, Trans-Pacific Partnership, trade restrictions and foreign investment in the US The bilateral FTA and NAFTA were newly added to the lobby activities list this year. 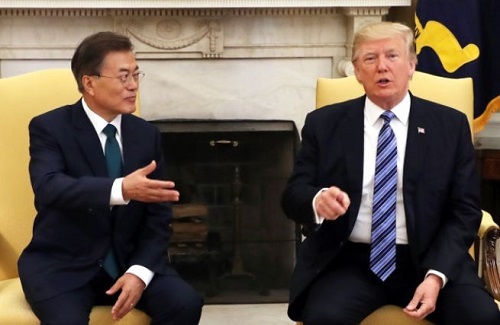 The US has been strengthening its import restrictions and anti-dumping tariffs on steel imports. POSCO opened a new office in Washington at the start of this year and hired a lawyer with expertise in trade issues.

Hanwha, who exports solar batteries to the US, reported

$20,000 in lobbying in the second quarter this year. It named an ongoing investigation by the US International Trade Commission into solar battery imports as the purpose of its activities.

Hyundai Motor recruited a former senior US government official to handle overall affairs at its Washington office. Its lobbying money, however, was smaller in the first half ($380,000) than last year ($430,000). Its sister company Kia Motors registered $380,000 during the period, the same amount as last year.