The competition -- co-organized and sponsored by The Korea Herald, Air Canada, Seoul Metropolitan Government and Creative Writing for Children Society in Vancouver -- drew some 200 entries from elementary, middle and high schools across Korea.

There were 30 winners, whose works were selected through a rigorous assessment process by a panel of professional judges, including Canadian authors and Korean professors. The top winners will have the chance to travel to Canada sponsored by Air Canada, while the winners of the Canadian Ambassador’s Award will publish their works on the embassy’s blog and The Korea Herald’s website.

The students wrote short stories in either English or French -- the official languages of Canada -- based on the theme of “150,” in recognition of the sesquicentennial of Canada as a modern confederated nation. 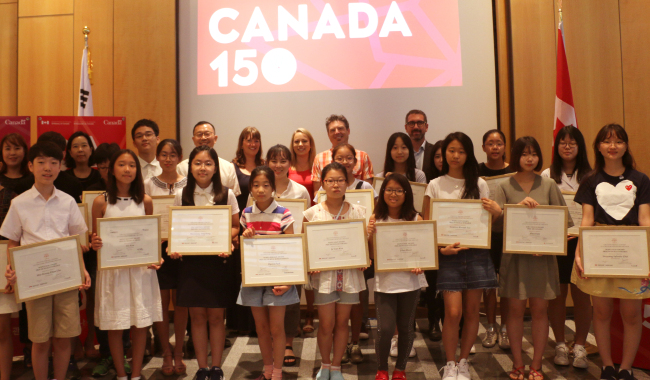 Student winners of the Canadian Embassy’s creative writing contest, Canadian authors and diplomats pose at an awards ceremony at the embassy in Seoul on Saturday. (Canadian Embassy)
“The anniversary is an important occasion for Canadians to celebrate Canada’s shared history and achievements with the rest of the world,” said the embassy’s Counsellor Patrick Hebert at the award ceremony at the embassy in Seoul on July 2. “Youth is an important aspect of the Canada 150 celebrations, and we wanted to include youth in our celebrations in Korea as well.”

Through the contest, the diplomatic mission aimed to help young students familiarize themselves with storytelling and look at the world from a new perspective, while also taking inspiration from established Canadian authors immersed in creative writing education, he explained.

Canada over the years has produced internationally famous writers including Margaret Atwood, Yann Martel, Michael Ondaatje and Gabrielle Roy. Canadian short story writer Alice Munro was the winner of the Man Booker International Prize in 2009 and Nobel Prize for Literature in 2013, making her the first woman to win the prestigious prize for short stories.

Participating Canadian writers and judges were Lee Edward Fodi, author and illustrator of children’s books series “The Chronicles of Kendra Kandlestar”; Stacey Mason, novelist of the “Arthur Bean” trilogy, creative writing mentor with the Writers’ Exchange in Vancouver and writer-in-residence at the Berton House in Dawson City, Yukon for winter 2017; and Kallie George, author of several children’s books, including “Feather, Flap and Spike: Duck, Duck, Dinosaur” and “The Magical Animal Adoption Agency.”