The comment came a day after South Korea announced a plan to designate a national day to remember the hundreds of thousands of Korean women who were forced into sexual slavery for Japanese troops during the war.

"That is something that we by and large condemn ... we very clearly condemn," State Department spokeswoman Heather Nauert told a press briefing in response to a question from Yonhap on the premise that she was not aware of the plan. "It's an area of major concern for us."

She declined to comment further, saying it is a "very sensitive matter."

Historians estimate that up to 200,000 Asian women, mostly from Korea, were mobilized by the Japanese military to work in front-line brothels. Korea was under Japanese colonial rule from 1910-45. 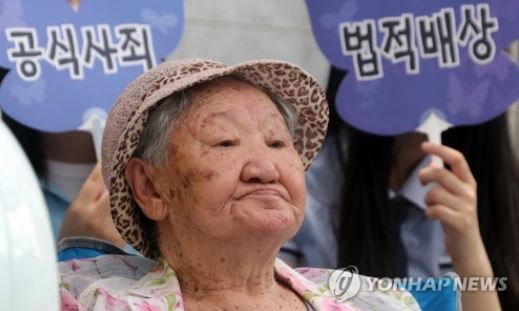 Kil Won-wok, a victim of Japan`s wartime sexual slavery, takes part in a weekly rally demanding a resolution to the issue in front of the former building of the Japanese Embassy in Seoul on July 19, 2017. (Yonhap)
The issue of "comfort women," a euphemistic term for the victims, has long been a thorn in ties between South Korea and Japan. In 2015, the two sides struck a deal to resolve the issue with an apology and compensation measures from Tokyo. But some of the Korean victims have rejected the agreement, saying it fails to address their grievances.

The new South Korean administration of President Moon Jae-in, who took office in May, has strongly indicated it could revise the deal.

Katina Adams, a spokeswoman for the State Department's Bureau of East Asian and Pacific Affairs, elaborated in remarks sent later to Yonhap.

"In general, our position of this issue has not changed," she said. "The trafficking of women for sexual purposes by the Japanese military during World War II was a terrible, egregious violation of human rights. We have long encouraged both sides to approach this issue in a way that would promote continued healing and reconciliation."

The memorial day is likely to fall on Aug. 14, the anniversary of when Kim Hak-sun, a former comfort woman, first publicly testified in 1991 about Japan operating an organized military brothel system during the war.

The South Korean government also plans to launch an institute to conduct research on the issue by 2019 and a museum to shed light on the atrocities by 2020. (Yonhap)