Park Yong-maan, chairman of the Korea Chamber of Commerce and Industry, has exhibited a somewhat different image as a member of a chaebol family in the past years.

The former Doosan Group chairman and the fifth son of the nation’s oldest conglomerate, posts his daily ride to work via subway train on Twitter, and is known as a man of humor who surprises his staff on April fool’s day. Through a TV program on Korean chaebol some years ago, the chairman even opened up his residence, family and his life as a serious businessman, defying the public concept of being a privileged and authoritative boss.

Despite Park’s open-minded personality and the image of a modern business leader, his job as the chairman of the nation’s top business lobbying group, at this particular time of a political drive on chaebol reform and economic democratization, appears heavy. 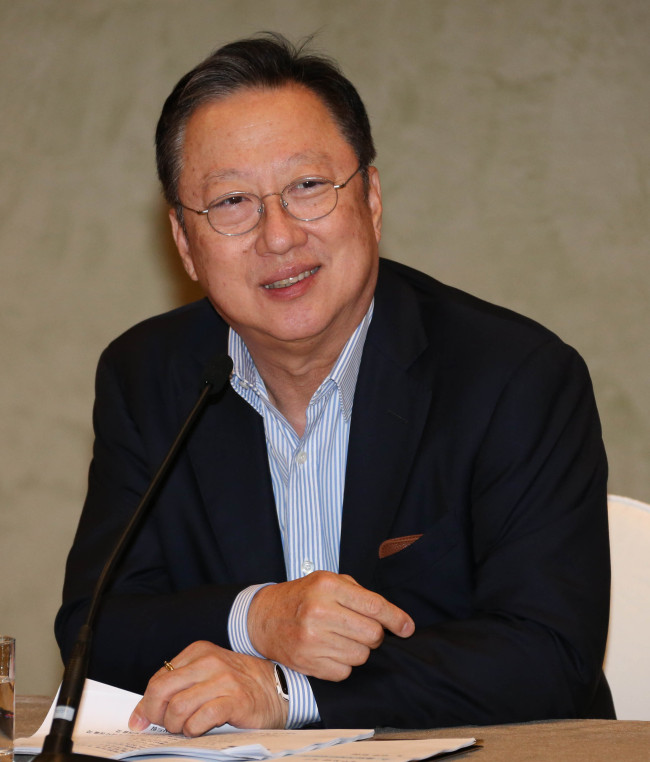 KCCI Chairman Park Yong-maan speaks at a press conference held at the organization‘s annual forum in Jeju on Wednesday afternoon. (KCCI)
The KCCI is one of the five major business lobbying groups in South Korea, with a membership of 165,000 large and small enterprises. For years, the Federation of Korean Industries served as the leader of the five, conveying the messages from the business circles to the government, and the public.

But a bribery scandal last year and an alleged FKI’s involvement has pushed the organization -- now with a tainted image of corruption -- to the backseat, pulling the KCCI to the fore instead.

Questions linger whether the KCCI could make better performance than its predecessor which still holds vast economic, political and cultural networks in and out of the country.

President Moon Jae-in, a former activist lawyer, taking office has made the KCCI’s role even more difficult, as the nation’s new leader rides high on slogans of chaebol reform, urging conglomerates to improve the governance transparency, and for making fair economic economy by seeking a minimum wage hike and flexible work hours.

Amid tension building in the business community for the looming pressure, Park has taken a neutral position for now, urging businesses to acknowledge the reality of deeper economic inequality, and encouraging the government to listen to all stakeholders in conjuring their policies.

“South Korea holds serious problems with poverty, economic polarization, (long) work hours and job insecurities, and they look worse when compared with global standards,” he told reporters at the KCCI’s Jeju Forum being held this week. South Korean workers, on average, work the second-longest hours next to Mexico, among the OECD member countries.

“(Businesses) need to understand such problems first and proactively engage themselves in talks and seek solutions together. I believe this is a way to create an environment where businesses could make demands fair and square (later on).”

Despite geopolitical instability and rising protectionism, the South Korean economy appears to be on the upper trend, with the nation’s exports staying in black and a number of businesses enjoying surprising earning records so far this year.

But such profits and wealth have been concentrated only to a few companies, he said. And without making efforts to fairly distribute economic gains, confrontations between the management and the labor, the haves and the have-nots and the conservatives and the liberals would go on, he said.

Asked on his first impression on Moon, Park said the president seems to be a listener and a sincere person. While calling for a voluntary change in businesses to become more responsible entities themselves, Park also urged the government to bring “sensational” deregulatory measures, to invest in software infrastructure and to have practical thinking to help Korean firms to better compete in the global market in the era of the “fourth industrial revolution.”

Park who has led the KCCI since 2013, stepped down as the chairman of Doosan Group last year, passing the baton to his nephew Park Jeong-won.

The 61-year-old was the last sibling in the order of chairmanship in which his brothers took turns for decades, similar to the leadership of Muslim dynasties that has tended to pass between brothers.

Though he remains as the head of the board of directors at Doosan Infracore, a machinery arm of the group, Park has been fully engaged as the representative of the KCCI.

Expressing concern over the growing expectation on the KCCI, however, Park said he would positively take the responsibility of bridging the government and the corporate community.

“This is the job we have done before for a long time. And I still believe that (the KCCI’s role is about) making a contribution to the nation‘s society by fairly communicating with (the government) and addressing sound ideas on what would be good for the country.”