More unemployed young people are using their free time for personal activities rather than actively searching for jobs, data analysis showed Thursday, a trend that may be a sign that they have given up finding work.

Statistics Korea took a supplementary survey last month on 1.47 million young people between 15 to 34 to ask how they spend their time.

The survey results show that 35.4 percent were preparing to take tests that can lead to their employment. The same survey found that 5 percent of the polled youths had spent the time traveling, reading books or engaging in other personal activities, a jump of 28.2 percent from last year. 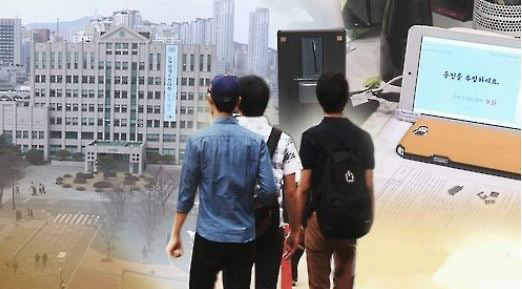 (Yonhap)
This group was bigger than the 3.2 percent of their peers who were getting vocational training.  There were more males in the group, up 105.2 percent from the previous year.

Another 17.4 percent said they did nothing, not even house chores.

State data put the youth unemployment rate for June at 10.5 percent, the highest for the month since 1999.

An official at Statistics Korea said that while the survey does not explain why some youths are not actively seeking work, it is possible that they just could not find jobs. "It may also be that the real point is not about whether one finds work or not, but about the growing social trend where free time is highly valued," he said.

Professor Lee Byung-hoon of Chung-Ang University noted that some young people quit even if they land jobs, finding it hard to assimilate into the working culture of the company that hired them.

"They could be living off of their parents, thinking after numerous failed attempts that they won't be able to work even if they tried," Lee said. (Yonhap)