Stressing the public role of businesses in the South Korean economy, Park Yong-maan, chairman of the Korea Chamber of Commerce and Industry, said that the time is ripe for businesses to respond to growing demand to improve business transparency, create more jobs and strengthen partnerships with smaller companies.

“This is the time for us, businessmen, to understand more about the difficulties (people face) in reality and respond by taking voluntary actions on our own initiative,” he said at a forum held in the southern resort island of Jeju.

“Spreading such positive messages across the nation will be the best way of fulfilling the task of our time, restoring the people’s trust and raising our reputation in society.” 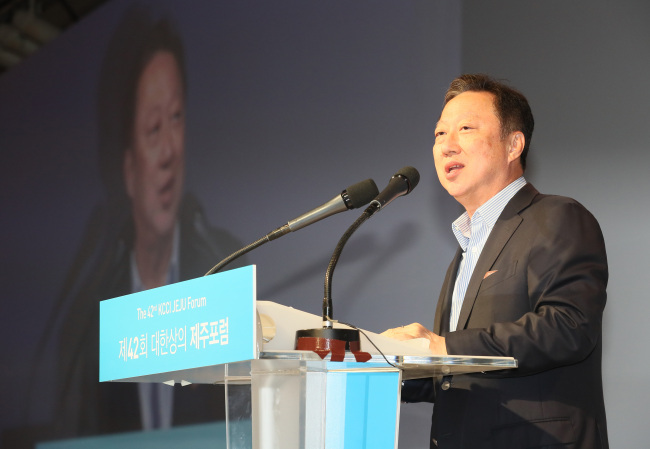 The nation is experiencing deep economic polarization, with individuals suffering from excessive work hours and job insecurity, he said.

If business interests are pursued without addressing the nation’s problems, businessmen will not be able to stand firm as members of South Korean society, he said.

The comment came amid escalating debate over the government’s plan to increase the minimum wage starting next year. Businesses say the plan might impose a huge economic burden on them.

Park was speaking at the opening ceremony of the KCCI’s Jeju Forum, which invited around 600 business representatives across the country. On the first day of the four-day forum, there were lectures by special guests including futurist Jerome Glenn and roboticist Dennis Hong on the “fourth industrial revolution” and the future of businesses.

To offer broader perspectives, Marc Knapper, deputy chief of mission to the US Embassy in Korea, is scheduled to speak about ways to strengthen economic ties between the US and South Korea. Chinese Ambassador to South Korea Chu Guo Hong will talk about the future of the two countries amid lingering diplomatic disputes on an anti-missile system.