South Korea's top financial regulator said Wednesday he will be more active in reining in household debt, calling it the biggest risk facing the nation's economy.

Choi Jong-ku, the newly appointed chairman of the Financial Services Commission, made the remarks in his inauguration speech earlier in the day.

The former deputy finance minister, who served at the finance ministry for about three decades, is tasked with slowing down the nation's growing mountain of household debt and restructuring some of the country's bloated business sectors.

"As household debt is deeply linked to our economy's structural factors, such as the property and welfare systems, I will actively tackle the issue," Choi emphasized. 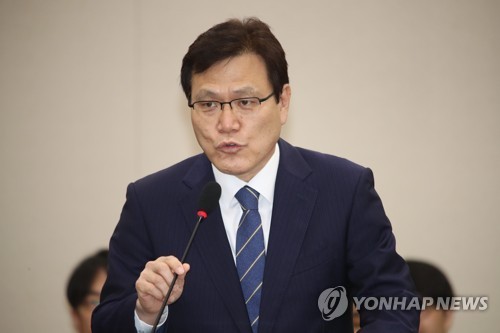 Currently, the local financial industry is advised to use the DSR, which reflects the share of income used to service debt, on a voluntary basis.

The nation's household debt, already the highest among emerging markets, is nearing about 1,400 trillion won ($1,248 billion) this year.

To help slow down the growth pace of household debt, the lending ceiling for homes located in areas designated by the government has been lowered from 70 percent to 60 percent of the property's value since earlier this month. The debt-to-income ratio has also been lowered to 50 percent from 60 percent. (Yonhap)