Some 269,000 foreigners were working an average of 209 hours per month at local companies as of May this year. The hike in minimum wage will raise their monthly pay by 332,891 won, which covers basic pay, overtime and employee insurance, according to the Korea Federation of SMEs. 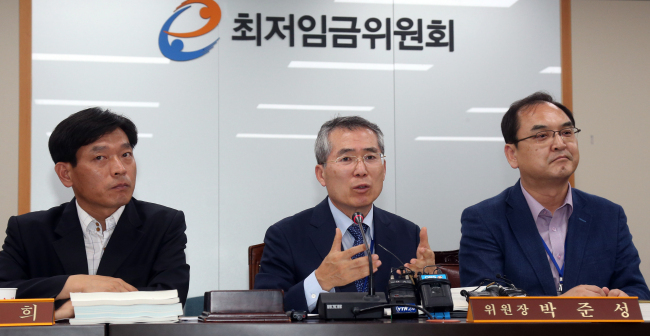 (Yonhap)
Labor and management representatives on Saturday agreed on a 7,530 won-per-hour minimum wage for next year, up 16.4 percent from this year. The increase is more than double the 7 percent gain agreed upon last year.

The business community has voiced strong complaints that the big leap in wages will deepen their troubles, especially when the national economy is showing signs of slowing. They claim that the hike will force them to lay off part-time workers who are meant to benefit the most from the wage increase.

Economists agree that SMEs, small corner shops and neighborhood restaurants are likely to bear the heaviest brunt of the increased cost.

Kbiz previously estimated that SMEs will be saddled with 15.2 trillion won more in pay for employees next year. The figure will surpass 16 trillion won if the increased pay for foreign workers is included, it said. (Yonhap)