[ The Korea Herald – Send E-mail ]
Service sector key to boosting employment
By Korea Herald
Published : Jul 12, 2017 - 17:28
Updated : Jul 12, 2017 - 17:28
A conspicuous change in the country’s employment structure over the past decade is that the proportion taken up by the service and distribution industries has continued to grow, just as the manufacturing and construction sectors’ share has fallen.

A recent study by a local economic research institute, based on data from all listed Korean firms, showed the number of service and distribution jobs rose by 153,000 from 2007 to 2016, expanding their share of total employment by 2.5 percentage points. 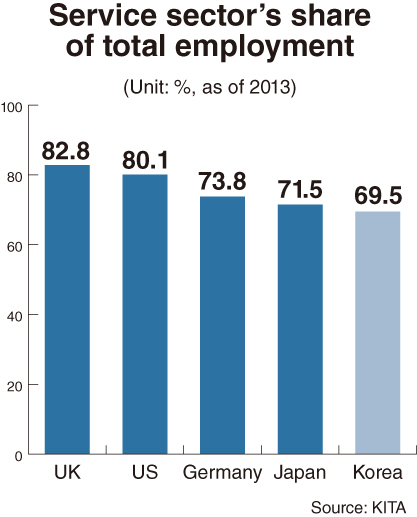 Over the same period, the number of manufacturing and construction jobs also climbed by 270,000, but their proportion of employment contracted by 2.3 percentage points.

Six of the 10 companies that increased their workforces the most over the past three years are in the service and distribution sectors, according to the study.

“There is not much room for manufacturing companies to increase employment at home, as they are moving production abroad with their growth stalled,” said Kim Yoon-kyung, an analyst at the Korea Economic Research Institute, a private think tank.

To the contrary, service and distribution industries will play a larger role in creating jobs on the back of lifestyle changes, including a steep rise in the number of single-member households, Kim said.

The number of employees at GS Retail, a company running a chain of convenience stores across the country, rose by 5,107 over three years through 2016, the largest among all local listed firms.

Experts say President Moon Jae-in’s administration needs to take note of the potential of service industries to create jobs if it is to settle or ease the country’s deteriorating unemployment problem.

Korea’s jobless rate rose by 0.2 percentage point from a year earlier to 3.8 percent in June as the number of newly employed people recorded a five-month low, according to government data released Wednesday.

The unemployment rate for young people, aged between 15 and 29, stood at 10.1 percent last month, up from 9.4 percent tallied a year earlier.

Moon has promised to create 810,000 jobs in the public sector during his five-year term, which began on May 10.

Lim Hyo-chang, a professor of business administration at Seoul Women’s University, described the promise as a “short-term, symptomatic approach,” saying efforts need to be stepped up to create more jobs by boosting service industries.

A study by the Bank of Korea showed the number of workers newly hired to produce 1 billion won ($873,000) worth of values amounts to 16.7 in service industries, nearly double the figure for manufacturing industries at 8.8.

The service sector’s proportion as a percentage of gross domestic product remained at 59.4 percent in Korea, compared to the 64.5 percent average for member states of the Organization for Economic Cooperation and Development.

Kwon Tae-shin, vice chairman of the Federation of Korean Industries, a main business lobby, said 1.23 million places would be added to the country’s job market if its service sector-to-GDP ratio was raised to the OECD average.

But the Moon administration has signaled it will toughen restrictions on the service and distribution sectors.

Experts say unfair practices may have to be corrected but overregulation would result in reducing jobs and sapping the economy as a whole.

They call for the government to draw up a long-term, comprehensive strategy to ensure service industries will create more quality jobs.

The immediate task facing the country’s service sector is to improve its labor productivity, which remains at less than half the level of manufacturing industries.

In 2014, the labor productivity of service industries was a mere 45 percent of that of manufacturing industries in Korea, with the corresponding figure for OECD members standing at 90 percent on average.

Economists note the country needs to look into ways to develop service industries in high value-added areas, not just preoccupying itself with increasing the number of jobs.

Lee Byung-tae, a professor in the College of Business at the Korea Advanced Institute of Science and Technology, suggested focusing on increasing jobs in areas such as finance, health care and energy.

These efforts will require the government to accelerate deregulation, make the labor market more flexible and improve the quality of human resources through education and training programs designed to enhance creativity.

Such work will also be crucial to preparing the country for competing better with other major economies to secure more of jobs to be created by a new wave of industrial renovations.

Lee expressed worries that labor and educational policies pursued by the Moon administration are going in the opposite direction of the structural changes being brought about by the fourth industrial revolution.