[ The Korea Herald – Send E-mail ]
Peru orders N. Korean mission to curtail number of staffers
By Catherine Chung
Published : Jul 11, 2017 - 11:28
Updated : Jul 11, 2017 - 11:28
The Peruvian government has called on the North Korean Embassy in Lima to halve the number of its staff as part of steps to implement the UN Security Council sanctions against the North's nuclear and missile programs, a US broadcaster reported Tuesday.

According to its report submitted to the Security Council on June 28, Peru called for the reduction of the number of diplomats in the North Korean mission in Lima from six to three in a letter sent to the North Korean ambassador there April 2, Voice of America said.

The deadline for the cutback was set at 90 days from the date when the mission received the letter, the broadcaster said. 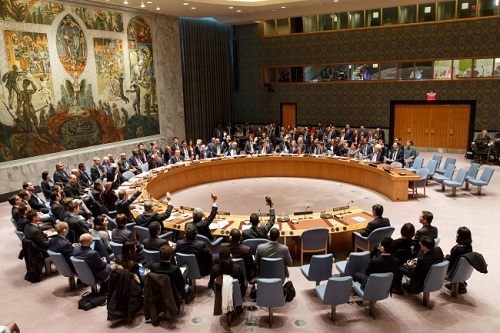 (Xinhua-Yonhap)
In addition, the Peruvian Foreign Ministry conveyed to the ambassador the importance of keeping the deadline on May 17, while stressing that the status of some of the staffers can be changed if the request is unmet, according to the broadcaster.

In May, Peru also denied the North's request to issue temporary diplomatic visas for three North Koreans pursuant to the Resolution 2321's Article 15, the broadcaster said. The Article stipulates that the Council has decided that all member states shall take steps to restrict the entry into their territories of North Korean government officials if they determine that such officials are associated with the North's nuclear or ballistic missile programs or other activities prohibited by UN resolutions.

The number of bank accounts of the mission and diplomats has also been restricted to one each in accordance with the resolution, it added. (Yonhap)