[ The Korea Herald – Send E-mail ]
BOK to brace for global tightening
By Son Ji-hyoung
Published : Jul 4, 2017 - 16:24
Updated : Jul 5, 2017 - 11:32
Emerging markets should brace for signs of monetary policy shifts in developed nations, and South Korea will remain vigilant to such signs that are moving toward ending a decade of fiscal stimulus, Bank of Korea Gov. Lee Ju-yeol said Tuesday.

“The massive amount of cash flow into global financial markets will be on the decrease at any rate,” Lee said, while presiding over a conference on economic trends. “The BOK will respond to this by closely watching the shift in developed nations’ monetary policies and international cash flow.” 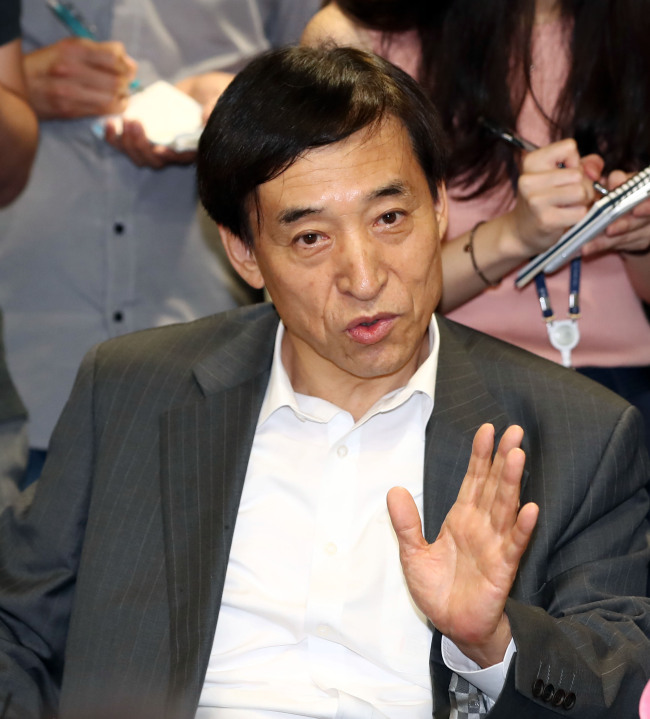 (Yonhap)
Lee returned to Seoul on Thursday after a weeklong trip to Europe to attend the Annual General Meeting of the Bank for International Settlements held in Switzerland and the ECB Forum on Central Banking in Portugal.

Speakers at the events, such as BIS General Manager Jaime Caruana and ECB head Draghi had echoed the latest signs of an upbeat economy and lowered deflation risks.

Draghi hinted at an end to expansionary monetary policy, which has lasted for nearly a decade with signs on shoring up local economies reeling from the 2008 global financial crisis.

A week prior to Lee’s trip, the US Federal Reserve decided to raise its key rate and reduce balance sheets on June 14,

“Many attendees at the meetings agreed the emerging markets might suffer unexpected adverse effects, so that the markets should brace for them,” Lee added.

Lee, however, played down the possible re-emergence of a taper tantrum across the world as in 2013, citing the emerging markets’ financial soundness in line with signs of European Union’s recovery.

“Of course, the monetary easing of developed countries still draws concerns,” Lee said. “However, emerging markets’ volume of foreign exchange reserve rose to the extent that they could safeguard enhanced financial stability.”

But panelists, mainly made up of heads of research institutions and state-led organizations, also warned of emerging markets’ potential fallout from developed nations‘ tapering, picking it as one of the “downside risks,” along with a crude oil price slump.