While more rain – falling at 30 to 80 millimeters per hour -- is expected in Seoul, Gyeonggi and most other parts of the country until Wednesday, a typhoon is fast approaching waters off Jeju Island, according to the Korea Meteorological Administration. 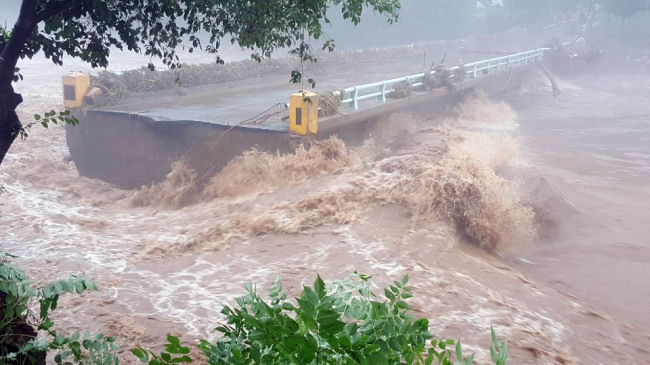 A bridge is destroyed in Hongcheon Country in Gangwon Province where 343 millimeters of rain fell overnight. (Yonhap)
“The monsoon rain front will become stronger, influenced by water vapor from the typhoon and bring more torrential rain to some regions,” said KMA official.

A 86-year-old man went missing after falling into a flooded stream in Cheongju, North Chungcheong Province, which received over 100 millimeters of rain between midnight Sunday and 8 a.m. Monday.

A bridge was destroyed and four mountain hikers were marooned by a flood in Hongcheon, Gangwon Province, where 343 mm of rain fell overnight.

At least 11 flood victims were evacuated and some 400 house buildings were momentarily waterlogged in Seoul and other metropolitan areas.

To adjust the water level, authorities also opened the floodgates at Bukhan River water system for the first time this year.

The Ministry of Public Safety and Security held an emergency meeting Monday to check preparedness against possible rain-related incidents, including floods, landslides, traffic jams and disruption to important facilities.

But some severe drought-hit areas received little of that rain. Sunday and Monday’s downpour brought only about 5 to 20 mm of rain to southern Gyeonggi Province.

The Ministry of Agriculture, Food and Rural Affairs said that at least 70 to 100 mm of rain is needed to bring an end to the drought in parts of Gyeonggi South Chungcheong provinces where the dry spell has been the most intense.

The monsoon front is expected to taper off southwards, pouring more rain on southern provinces till later this week.

Meanwhile, Typhoon Nanmadol, the third typhoon of the year, is currently moving northwest from Taiwan with a wind speed of 18 meters per second.

The meteorologists predict it may reach waters south of Jeju Island on Tuesday and turn northward toward Japan before losing steam Wednesday.

As of Monday 5 p.m., the KMA lifted all heavy rain alerts in the country, as the rains will ease a little on Wednesday. But the rain will return in full force toward the weekend, the KMA said.

Temperatures are expected to slightly go up, while Monday’s highs in Seoul and Daejeon were 28 degrees Celsius and 32 degrees in Daegu.