According to Chaebul.com, an online corporate tracker, total internal reserves held by 178 listed companies affiliated with the country’s 30 largest conglomerates stood at a record high of 691.5 trillion won ($606.5 billion) as of the end of March.

Internal reserves include profit reserves and capital surpluses. A high level of such reserves can be seen as reflecting a company’s financial health. However, it may also indicate a firm remains passive toward making investments, paying dividends and raising wages.

Listed firms affiliated with Samsung Group, the biggest conglomerate in the country, had 219.5 trillion won of internal reserves as of end-March, up 42 percent from 65 trillion won at the end of 2012. 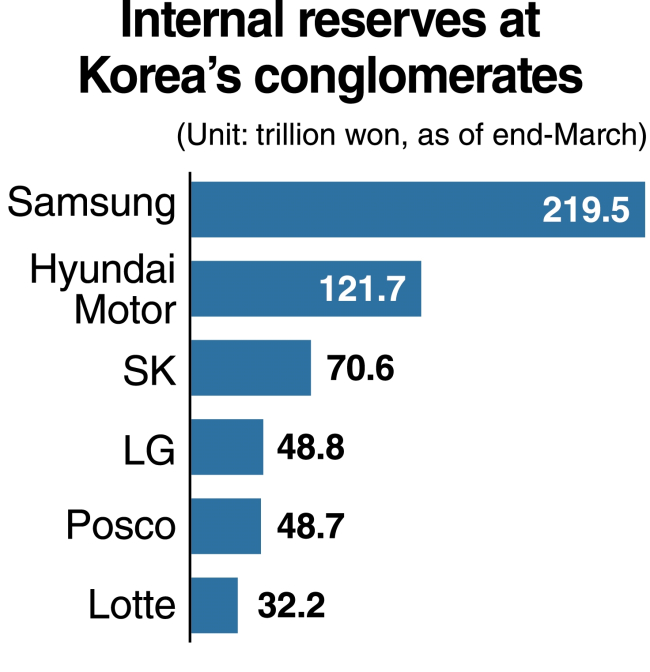 Retained earnings at affiliates of Hyundai Motor, SK and LG groups increased by 55.5 percent, 66.2 percent and 25.5 percent over the cited period to 121.7 trillion won, 70.6 trillion won and 48.8 trillion won, respectively.

The total amount held by all companies surveyed climbed by more than 176 trillion won during the same period, with the ratio of their internal reserves to paid-in capital also rising from 1,003.4 percent to 1,223.8 percent.

The rising level of corporate internal reserves has prompted calls for cash piled up at companies to flow back to helping reinvigorate the economy and increasing income for working families. 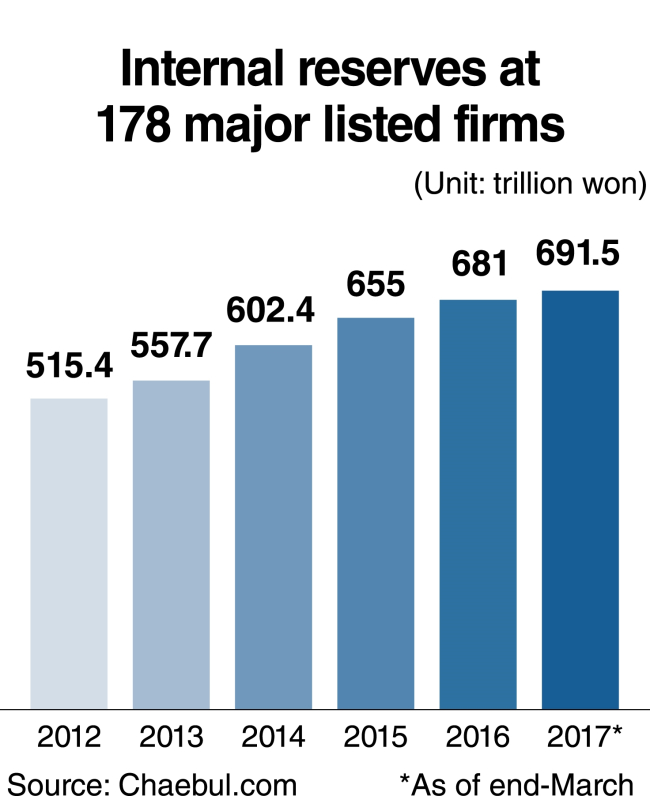 The previous government under President Park Geun-hye introduced a measure to levy a 10 percent tax on internal reserves if a company falls short of spending 30 to 80 percent of its earnings on wages for its workers, dividend payments to shareholders, support for subcontractors and investment in equipment and facilities.

President Moon Jae-in’s administration is planning to tighten the taxation system to draw more cash out of corporate coffers.

“It seems the current scheme has not worked well as many loopholes allow companies with large internal reserves to avoid taxation with ease,” said an official at a presidential advisory board for policy planning.

“We are working on a more effective and tighter system that could increase levies (on corporate internal reserves),” he said, requesting anonymity.

But business circles have reacted against such a move, arguing it makes little sense to impose punitive taxes on what is arbitrarily defined by government officials as excessive internal reserves.

Corporate officials and private economists indicate internal reserves should not be misunderstood as cash held by companies.

Internal reserves include not only cash but also inventories, buildings and other forms of assets that are difficult to be cashed in immediately.

According to a study by the Korea Economic Research Institute, a private think tank, Korean companies’ cash to asset ratio has gradually decreased over the past decade after peaking in the aftermath of the 2008 global financial crisis.

Hwang In-tae, an accounting professor at Chung-Ang University, noted Korean companies’ cash to asset ratio remained at half the level of US firms. But tangible assets, including facilities investment, accounted for 28.3 percent of their total assets, far above 19.9 percent in the US.

Hwang argued such figures showed it was not true that Korea’s large corporations had played a part in weakening national competitiveness by hoarding cashes and reducing investment.

In a departure from years of keeping shy of investment amid uncertain business conditions, Korean companies increased investment by 18.5 percent on-year in the first quarter of this year, partly on the back of a rise in exports.

Some economists also note that as foreign investors hold more than 40 percent stakes in many major Korean firms, an increase in dividend payout would result in an outflow of wealth rather than contributing to boosting the domestic economy.

It is still a conspicuous phenomenon that the country’s large corporations have become richer over the past decades with households struggling with stalled income and reduced job opportunities.

According to data from the Bank of Korea, corporate share of Korea’s gross national income climbed from 17 percent to 24.6 percent over the period between 1990 and 2015, while the corresponding figure for households shrank from 70 percent to 62 percent. The government’s proportion rose from 13 percent to 15.4 percent.

In a report presented to a conference of the Korean Economic Association early this year, Chang Ha-sung, a professor of business administration at Korea University, indicated the aggregate growth of Korea’s gross domestic product reached 249 percent over the cited period, with the average household income and the number of employees rising by 90.5 percent and 43.4 percent, respectively.

Chang, who was appointed as presidential chief of staff for policy last month, attributed the country’s growth without an increase in employment mainly to its adherence to an industrial structure focusing on manufacturing, which has shed jobs in accordance with automation and the off-shoring of production.

Manufacturers’ share of Korea’s GDP stood at 30.2 percent in 2014, the highest among member states of the Organization for Economic Cooperation and Development and the second most among G-20 economies, following China at 35.9 percent.

Chang said it was necessary to increase jobs in service industries by encouraging corporations to expand investment through deregulation.

Economists also recommend measures should be implemented to nurture more competitive small and medium-sized enterprises and innovative startups, which would help increase employment.