[ The Korea Herald – Send E-mail ]
KDB’s ‘Next Round’ program targets start-ups
By Julie Kim Jackson
Published : Jun 22, 2017 - 15:39
Updated : Jun 22, 2017 - 17:17
To help startups prepare for the future, Korea Development Bank has been running the “KDB Next Round” program that helps link companies with new investors.

First launched in August last year, KDB’s Next Round was introduced in an effort to minimize market friction and promote market expansion in order to further develop startup investments in the wake of the “fourth industrial revolution.” 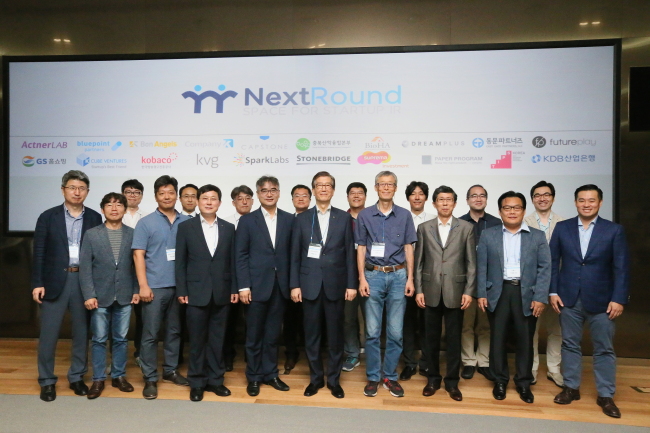 Participants pose for a photo marking Korea Development Bank-led “Next Round” program. (KDB)
The KDB’s investment platform does not involve a funding model or direct investment in ventures. It also does not involve contribution to a capital fund that invests in ventures. Instead, “Next Round” is an investment inducement platform through which the KBD facilitates investment attraction among startups and venture capitalists via investor relations networking opportunities, the company said.

The bank established a startup investor relations center on the first floor of its Seoul headquarters, where causal meetups for startups and venture participants are held Wednesdays and Fridays at 3 p.m.

Since its launch through the beginning of this year, the company has held 25 investor relations networking sessions with 97 participating companies, leading to a total of 43.6 billion ($38.2 million) won of investments in 22 startups.

This year, KDB plans to hold a total of 75 networking rounds with 300 participating startups and expects to attract venture capital investments of up to 100 billion won. KDB also plans to invest 15 billion won of its own capital in the next round of its program.