The number of people preparing for jobs surpassed the 700,000 mark in May for the first time ever, data showed Thursday, amid the rising unemployment among young people. 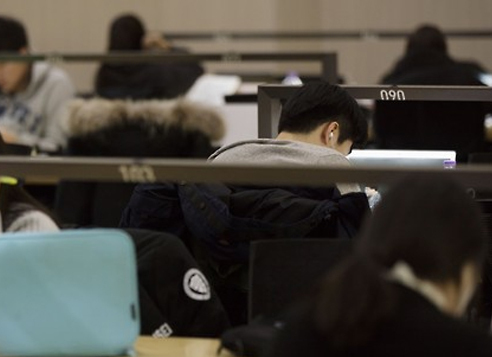 (Yonhap)
Those who are preparing for jobs are not categorized as jobless as they belong to the economically inactive population. These include people studying for state employee exams or attending vocational training courses.

The rise in the number of de facto jobless people is attributed to people putting off getting jobs or being reluctant to seek positions due to the aggravated employment market, the agency said.

The labor markets has not been able to create enough posts as the country as a whole has been growing at a sluggish pace.

The total number of de facto jobless people breaks down to 251,000 people attending private educational institutes for state or private firm exams and 484,000 people preparing for jobs on their own at home.

The unemployment rate for those in their 20s stood at 9.6 percent in May.

The figure, however, rises to 22.9 percent when those who are either preparing for jobs or have quit applying for jobs are included, according to the Statistics Korea data.

"We are committed to creating new positions and improving the quality of jobs for young people through the implementation of an extra budget and tailored support for the disadvantaged in employment," a government official said. (Yonhap)