[ The Korea Herald – Send E-mail ]
Activist farmer died due to external cause: SNHU
By Kim Da-sol
Published : Jun 15, 2017 - 15:46
Updated : Jun 15, 2017 - 18:09
A farmer knocked down by a blast from a police water cannon during an anti-government rally in November 2015 died due to an external force, not illness, Seoul National University Hospital said Thursday, in a correction made nine months after his death. However, the hospital denied political consideration was the reason behind the rare decision.

Kim Yon-su, vice president of SNUH, told a press conference that the death certificate of Baek Nam-gi will be revised following a monthslong discussion by the hospital’s ethics commission.

Kim Yon-su, vice president of Seoul National University Hospital, speaks during a press breifing in Seoul on Thursday. (Yonhap)
“Doctors of neurosurgery accepted the ethics commission’s request to revise the death certificate yesterday,” Kim told reporters at a press briefing. Baek Sun-ha, the doctor who was in charge of Baek’s treatment, was not present at the briefing.

The farmer, 69, died at SNUH in September last year after spending 10 months in a coma. Doctors had stated that his death was caused by an illness, sparking backlash. Critics and the bereaved family claimed that the hospital arrived at the conclusion due to the connection between former President Park Geun-hye and the hospital’s chief. At the time, the SNHU chief served as a personal doctor to Park.

According to the hospital, the certificate will be changed to state that Baek’s death was the result of an external force. Kim explained that Baek died as a result of a cerebral hemorrhage caused by a direct blast from a police water cannon at the rally in 2015.

“Over the last six months, doctors at the ethics commission had a thorough discussion and reviewed perspectives from doctors and experts outside,” Kim said, adding that a compensation suit raised by the bereaved family in April had motivated the doctors to actively step up the discussion.

“We decided to go with the directives of the Korean Medical Association on the proper way to fill out medical reports.”

As for why it took so long, Kim cited the hierarchy among doctors and supervising professors, which had hampered different views on the diagnosis from being accepted. 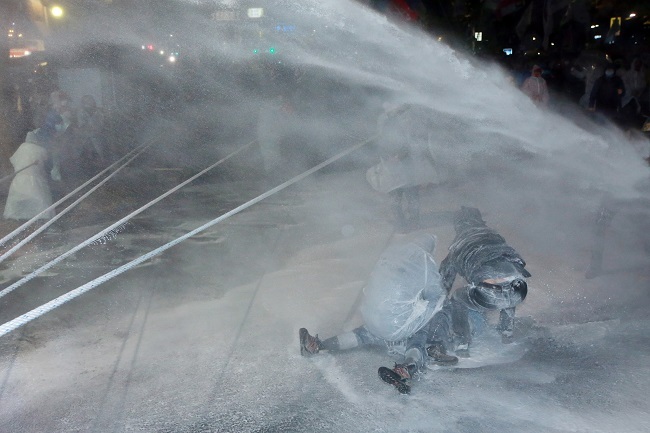 (Yonhap)
To prevent a similar situation from happening, the hospital has established an independent ethics commission for doctors to further discuss different views in diagnosis, Kim said.

Due to the authorities and the bereaved family taking issue over whether to conduct an autopsy to determine the exact cause of death, Baek’s funeral had been delayed for more than a month until early November.