It will be the Board of Audit and Inspection’s fourth inspection of the 22 trillion won ($19.6 billion) project, which was conceived and pushed by former President Lee Myung-bak. The BAI said the decision was based on “the necessity of an inspection as raised by the public and media and the consideration of the yearly inspection plan.” 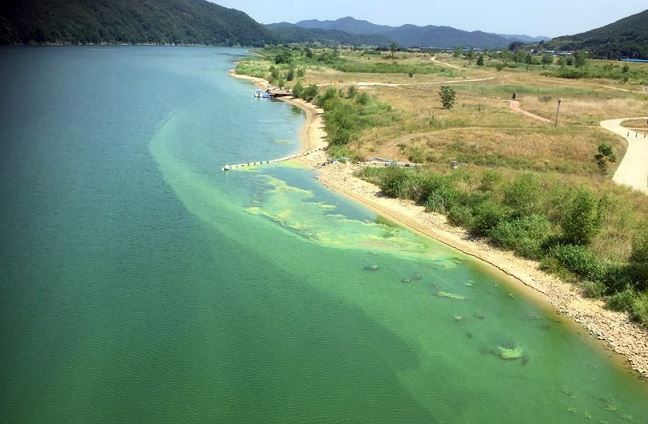 Green algae blooms are spotted near the Hancheon-Changnyeong Dam in the country's southeastern county of Changnyeong on June 9, 2017. (Yonhap)
Since late May, the BAI has reviewed relevant documents submitted by the environment and land ministries for the river refurbishment project. An association of environmental activist groups also filed an application to inspect the environment assessment of the project.

The decision to launch another probe came almost three weeks after President Moon ordered a “policy inspection” of the massive project, which a large proportion of the public still disapproves of.

Authorities will begin the preliminary investigation starting this week and conduct on-site inspections from as early as July. The results of the probe will be released in late October, if it runs smoothly.

The inspection will extensively review the project from the decision-making process of the policy to construction, water quality assessment and follow-up management, the audit body said.

Initiated in 2008, the project required the rebuilding of 87 old dams, the construction of 16 new ones as well as the reinforcement of some 300 kilometers of riverbanks along the nation’s four main rivers.

Its aim was to prevent water shortages, improve water quality and create riverside tourism spots, but critics called it a failure that brought disastrous damage to the environment.