The five-year treasury yield dropped to 1.865 percent from 1.917 percent Monday. Ten-year yields edged down to 2.177 percent from 2.224 percent the previous trading day.

The recovery came after projections for the bond market in South Korea slightly improved Tuesday.

The composite Bond Market Survey Index, a survey-based indicator for the local bond market, rose 3.6 points to 83.7 on-month in June, according to the Korea Financial Investment Association. The higher the index, which ranges between 0 and 200, the more likely the bond yield will drop, 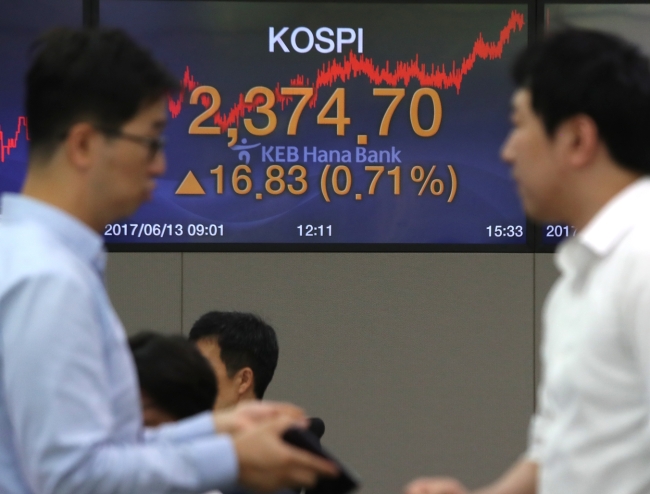 During the same period, the Kospi and Kosdaq tumbled 1 percent and 1.38 percent, respectively.

Bank of Korea Gov. Lee Ju-yeol hinted at monetary tightening to brace for the expected US Federal Reserve’s June hike this week and curb swelling household debt, which he reneged on Tuesday. It was the first time Lee suggested correcting the pace of monetary easing as the central bank governor.

Experts played down the possibility of the rate hike by the central bank in the near future, regardless of the release of the meeting minutes from the US Federal Open Market Committee, slated for Thursday.

“The rate hike is not a likely destination for the policy bank, considering (President Moon Jae-in‘s) aim to achieve wage-led growth,” wrote Park Hyung-min, a strategist at Shinhan Investment, in a Tuesday report.

“Little has changed in economic readings since the Korea’s Monetary Policy Committee‘s meeting in May,” wrote Jeon Byung-ha of Ebest Securities on Tuesday. “Gov. Lee’s remark signals the tightening will help curb the rise in household debt, but (the policy) is not likely to be implemented as said.”

Other experts said the appetite for government bonds in South Korea will improve, citing the projection for US Consumer Price Index inflation to be below 2 percent.

“The subpar labor market condition in the US will sap consumer sentiment, leaving the policymaker no choice but a softer belt-tightening, and subsequently, a stronger appetite for bond markets,” said Kim Hyoung-ryoul, a strategist at Kyobo Securities.

Kim added the monetary policy at home and abroad would not bring about a bubble burst in markets, saying the imminent US job market readings would rather cause a fluctuation in the local stock markets.