Police said Tuesday that a graduate student had been arrested on suspicion of a parcel bomb attack that injured a college professor earlier in the morning.

The suspect is a 25-year-old graduate school student who also studies engineering at the same university, according to the police.

An unidentified parcel bomb exploded at Seoul’s Yonsei University on Tuesday, causing injury to the professor who opened the parcel. Police said it appeared to be a nail bomb similar to that used in a recent terror attack at an Ariana Grande concert in Manchester, England.

The explosive, made from a coffee tumbler, gunpowder and four AA-size batteries, was “clumsily made” and looked like it was the work of an amateur, police said. However, it contained scores of screws 1 centimeter long or shorter to make it more lethal. 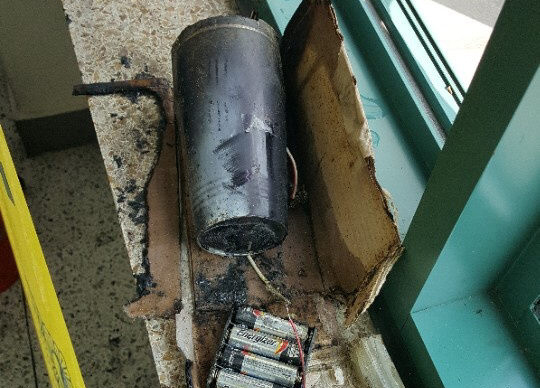 The explosive, made from a coffee tumbler, gunpowder and four of AA-size batteries, is found inside a professor’s office in Yonsei University in western Seoul, Tuesday. (Yonhap)
A professor of mechanical engineering who opened the parcel suffered minor burns and was taken to a nearby hospital.

The blast occurred at an office on the fourth floor of an engineering faculty building at around 8:41 a.m., police said.

The police activated a special team to investigate the details of the explosion, suspecting it may be a terrorist attack. They reviewed surveillance camera footage installed on other floors of the building to investigate who sent the parcel. There was no camera installed on the fourth floor.

The injured professor reportedly told police that a shopping bag containing a box 20 centimeters long and wide was hanging from the door knob of his office. It exploded when he tried to open it. Witnesses said they saw pieces of metal fly out upon the explosion. 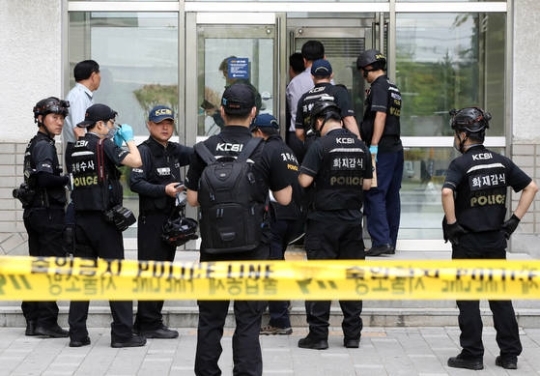 Police have cordoned off the site of a suspected parcel bomb attack at Yonsei University in western Seoul on June 13, 2017. (Yonhap)
The Seoul Metropolitan Police Agency’s Forensic Investigation dispatched a team of 70 officers to the scene to determine the exact cause of the accident and analyze the explosive.

A team from the National Intelligence Service Korea’s Terrorism Information Integration Center and a military bomb squad were also sent to the scene.