“Uncertainties about growth remain still high and inflation pressure from the demand side is not strong. Thus, we need to maintain expansionary monetary policy for the time being,” BOK Gov. Lee Ju-yeol said in a speech to celebrate the bank’s 67thh anniversary.

“However, if economic recovery continues and shows clear signs of improvement, we would probably need to readjust the pace of monetary easing.” 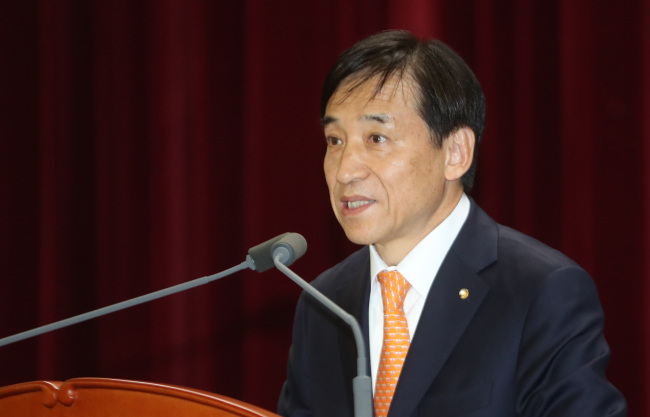 BOK Gov. Lee Ju-yeol speaks at a ceremony to celebrate the 67th anniversary of the central bank in Seoul, Monday. (Yonhap)
It is the first time that Lee mentioned readjusting the pace of monetary easing since he took office in April, 2014. The BOK has reduced the interest rates five times over the past two years.

The BOK has kept its base rate at a record low of 1.25 percent since June last year, to support the sluggish economy that has been mired in weak domestic demand and slow exports.

However, a series of improved economic data such as strong exports and construction investment this year have prompted the central bank in April to revise up its 2017 growth forecast to 2.6 percent.

Lee also said the bank was likely to lift the growth projection further in July, considering the government’s push for stronger fiscal spending with an 11.2 trillion won extra budget to create jobs.

He said the BOK will prudently monitor the pace of household debt growth and the US Federal Reserve’s interest rate decisions.

The Fed is widely expected to raise the interest rate from the current 0.75-1 percent range to 1-1.25 percent range in its two-day meeting on monetary policy that begins Tuesday, due to improved employment data and rising inflation. 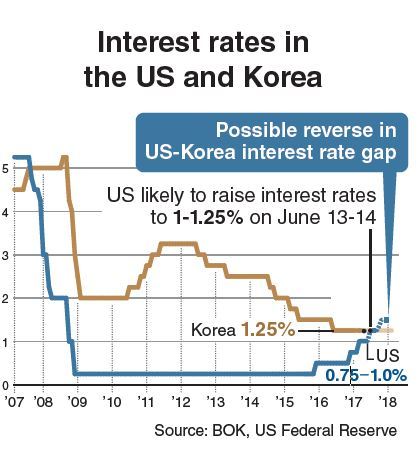 John C. Williams, president and CEO of the Federal Reserve Bank of San Francisco, recently said in Seoul that the Fed could raise its key rate four times this year instead of three, if there is a big boost in fiscal policy in the US. The Fed raised the rate in March this year.

If the Fed raises the rate this week and again in the second half, with the BOK freezing the rate at 1.25 percent, the interest rate gap between the two countries could be reversed. The reversed rate gap might prompt foreign investors pull their funds from Korea to higher-yielding assets in the US.

Analyst Kim Ji-na at IBK Investment & Securities did not expect the BOK to raise the rate at least until this year, despite Lee’s hawkish comment.

“His comment is a little bit more hawkish than those that came out during the May monetary policy committee’s meeting. But he didn’t mean an imminent hike. Rather, he seems to have opened more possibility for a hike early next year,” Kim told The Korea Herald.

“The BOK will need more time to gauge the actual effect of an extra budget on the local economy.”