This may help President Moon Jae-in persuade opposition lawmakers to agree to the additional fiscal spending plan, which was proposed less than a month after he took office to implement programs designed to create more jobs and boost the livelihoods of low-income families for the rest of this year.

But it will be a different story to raise the funds to carry out his lavish election promises during his 5-year tenure. 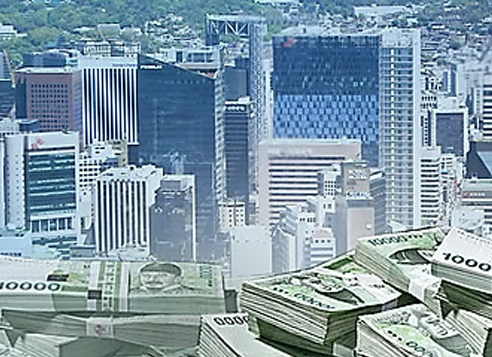 (Yonhap)
It is estimated to cost at least 178 trillion won over the coming five years to implement his pledges to create 810,000 jobs in the public sector and expand welfare benefits.

On the campaign trail, Moon said he would try to cover the cost by readjusting fiscal expenditures and reducing tax breaks before seeking to raise taxes based on public consensus, if necessary.

A recent survey conducted by a local pollster at the request of the National Assembly speaker’s office showed it would be difficult to reach such a consensus.

Of the 1,031 Korean adults polled, 51.3 percent objected to shouldering more tax burden to finance the implementation of Moon’s campaign pledges, with 45.2 percent agreeing to do so. 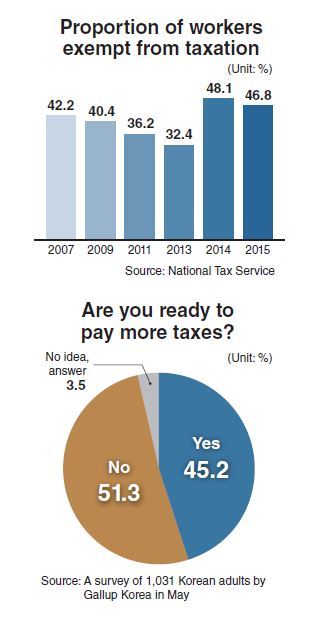 But 85.5 percent and 82.3 percent agreed to impose heavier taxes on high-income earners and large corporations, respectively.

In keeping with this sentiment, a presidential committee serving as a de facto transition team of the Moon administration is working to change the taxation system to increase the burden on the rich and big firms and expand support for middle-class and low-income households.

In a related move, a lawmaker from the ruling Democratic Party of Korea last week submitted a bill to the parliament proposing to raise the maximum individual income tax rate from the current 40 percent to 42 percent and the base for applying the highest rate from 300 million won to 500 million won.

The liberal ruling party is also pushing to increase the maximum corporate tax rate, which is now set at 22 percent, to 25 percent.

Experts note such works need to be preceded by or go with efforts to reduce the proportion of waged workers exempt from tax payment.

According to data from the National Tax Service, 8.1 million wage earners, or 46.8 percent of the total, didn’t pay a penny in tax in 2015. The corresponding figures remained far below 20 percent in other advanced countries, going down to as low as 2.9 percent in the UK.

The administration under Moon’s predecessor Park Geun-hye took steps to cut tax breaks, which were coupled with a rise in corporate profits to increase tax revenues in recent years.

But it refrained from touching on tax credits and benefits for most salaried workers after a revised year-end tax settlement scheme angered them in 2014.

Raising corporate tax rates, which would be out of tune with the global competition to forge business-friendly conditions, would do little to increase revenues while pushing companies to go abroad rather than investing more at home.

“It is necessary to take a comprehensive and balanced approach to taxation reform,” said Oh Kun-ho, who heads a civic group working to secure funds for proper welfare programs.

During his confirmation hearing last week, Finance Minister Kim Dong-yeon said it was necessary to expand the tax base in a move toward building a fair and just taxation system.

He noted the need to reduce the number of waged workers exempt from taxation and vowed to levy income taxes on pastors, priests and monks starting next year as planned.

His remarks drew attention in connection with the ongoing work to draft a revision to the tax code by the end of August.

Experts say Moon will face an increasing need to raise taxes down the road as there will be a limit to securing funds for fulfilling his election pledges from other means he will initially resort to.

Korea may be seen as having room for additional tax hikes as its tax burden as a percentage of gross domestic product remains less than those in other member states of the Organization for Economic Cooperation and Development.

The tax-to-GDP ratio of Asia’s fourth-largest economy stood at 18 percent in 2014, below the OECD average of 25.1 percent.

But its fiscal soundness is not far from guaranteed in the long run as the country with the world’s most rapidly aging population and lowest birthrate has increased welfare spending at the fastest pace among major advanced nations in recent years.

Moon’s push for programs to further expand welfare benefits and create more jobs might add up to undermine the country’s fiscal health more deeply, leaving his successor with massive bills to pay rather than a revenue surplus.

“It takes courage to set up a sound fiscal plan, which involves more conflicts of interest than revising the Constitution as it is directly linked to one’s pocket,” said Lee Jung-hee, a professor of administration at the University of Seoul.

Experts say the Moon administration may need to trim his election pledges and finance core programs in a way the additional burden will be shared more broadly and reasonably.