South Korea will extend a soft loan of $1 billion to a massive infrastructure development plan in the Philippines over the coming six years, industry sources said Monday.

The Export-Import Bank of Korea (Korea Eximbank) will provide lower-interest, long-term loans under the state-run economic development cooperation fund  President Rodrigo Duterte is planning to spend $168 billion on big-ticket items such as railways and ports over the next six years as part of his ambitious socioeconomic agenda dubbed "Dutertenomics." 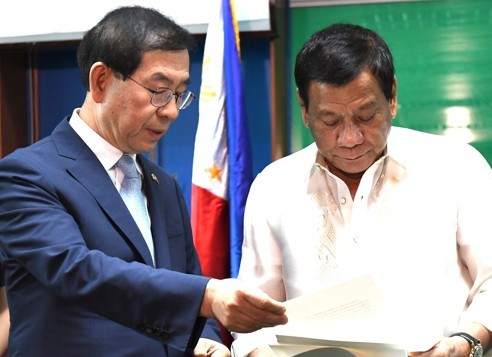 Philippine President Rodrigo Duterte (R) reads a personal letter from South Korean President Moon Jae-in that was presented by Seoul Mayor Park Won-soon, Moon's special envoy to the Association of Southeast Asian Nations (ASEAN), in the southern Philippine city of Davao on May 22, 2017, in this provided photo. (Yonhap)
The EDCF was set up in 1987 to provide low-interest loans to developing countries and boost domestic companies' business expansion in those areas.

Korea Eximbank's provision of the $1 billion loan is compared to the combined $778 million in EDCF that has been provided to the Philippines so far.

Seoul's state-run trade bank has decided to boost the EDCF provision in attempt to help South Korean firms' foray into the Philippines as the country's outlook on economic development bodes well with Duterte's plan to enhance the country's infrastructure.

An official at Korea Eximbank said the provision of the loan for Dutertenomics is expected to increase South Korean firms' opportunities to participate in the country's infrastructure projects.

The Philippine government plans to finance around 80 percent of the infrastructure spending locally, and the rest from foreign sources. (Yonhap)