"Park had a happy time with her local fans at Hong Kong's KITEC on Saturday," S.A.L.T. Entertainment said in a release.

The actress performed six songs, including a song from the medical series "Doctors" where she played Yoo Hye-jung, a neurosurgeon, during the event. 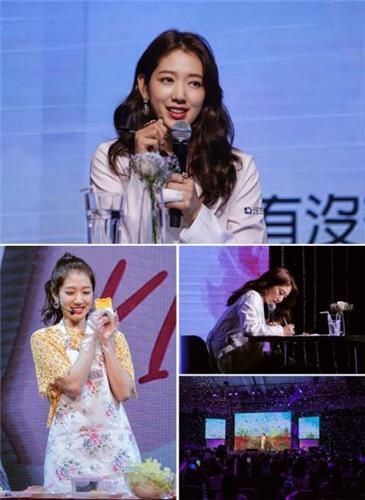 (Yonhap)
In the "Dr. Yoo's consultation section," she put on a doctor's gown and listened seriously to the anxieties of some of the fans, wrote and handed over prescriptions filled with clear answers.

The actress also presented the fans with a "three-stage lunch box" consisting of rice balls, sandwiches and fruit.

Her Asian tour is scheduled to continue in Taiwan early next month. She will donate the entire proceeds from the tour to the Korea Food for the Hungry International, a Seoul-based charity group, according to the entertainment agency. (Yonhap)