Total outbound shipments reached $12.2 billion during the cited period, down 12.2 percent from the same period last year, according to the findings compiled by the Korea Customs Service. 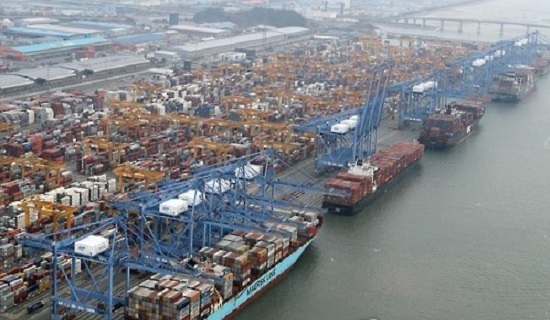 (Yonhap)
The decrease comes partly on the back of huge increases of ships exported in early June of last year, the agency said.

"The number of ship exports greatly increased in early June of last year," a KCS official said. "Last year's number was unusually large, and the data does not mean exports are shrinking."

Meanwhile, the latest findings showed that imports rose 12.4 percent to $13.5 billion over the cited period. Consequently, the country logged a trade deficit of $1.3 billion.

Asia's fourth-largest economy saw its outbound shipments make a turnaround from a two-year slump in November last year on the back of recovering world trade and rising oil prices.

Last month, South Korea's exports jumped 13.4 percent from a year earlier to extend their winning streak to seven months on the back of brisk overseas sales of computer chips and displays. (Yonhap)