“We are currently pushing to hire more guards and revamp facilities to protect citizens’ safety. We will allow no more unfortunate accidents,” Seoul Mayor Park Won-soon said via radio. 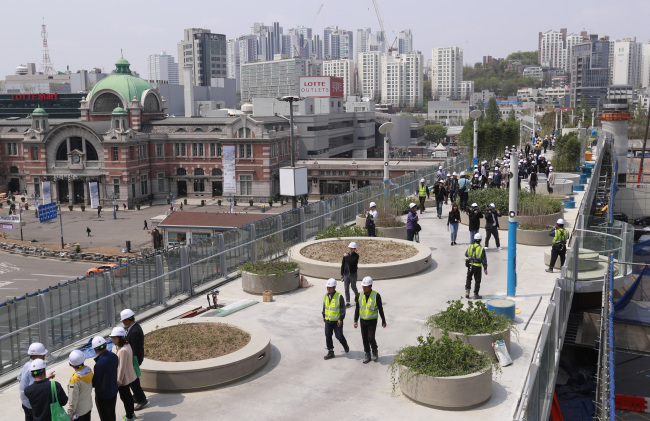 (Yonhap)
On May 30, a 32-year-old man from Kazakhstan jumped from the 17-meter high Seoullo 7017 in an apparent suicide, crossing over the 1.4-meter-high safety walls erected to prevent a fall.

The incident occurred just 10 days after the elevated park opened on May 20. It has sparked concerns that the capital’s newest landmark might become a site for suicide attempts in a country with one of the world’s highest suicide rates.

Fears of secondary accidents also surfaced, as the park is above a high traffic area near Seoul Station.

To prevent suicide attempts, Seoul Metropolitan Government plans to increase the number of guards for the park from the current 16 to 31 officers. At least 10 guards will man the overpass-turned-pedestrian park around the clock from July.

The city government, however, decided against raising the height of the existing walls, considering structural safety issues, such as the total weight of the elevated walkway and wind pressure. Instead, safety hand rails will be augmented.

Modeled after New York’s iconic High Line, Seoullo 7017 was a project involving the renovation of a 40-year-old highway into a public park.