South Korea's stock market was white-hot on massive foreign buying in May, emerging as the top performer among bourses in major advanced and emerging countries, data showed Friday.

The benchmark Korea Composite Stock Price Index closed at 2,347.38 Wednesday, up 6.4 percent from a month earlier, according to the data by the Korea Exchange and the Korea Center for International Finance.

The Hong Kong Hang Seng Index came next with a 4.2 percent increase, followed by India's Mumbai Index with 4.1 percent and the index of South Korea's tech-heavy KOSDAQ market with 3.8 percent. 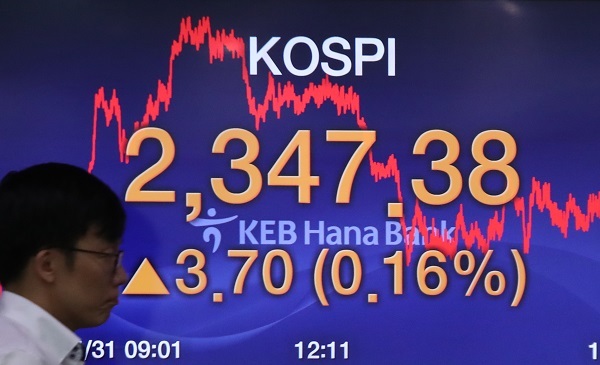 (Yonhap)
The May figure also marked the largest monthly rise since the 7.1 percent expansion recorded in January 2012. Comparable on-month increases were 2.1 percent in April and 3.3 percent in March.

In tandem with the KOSPI's surge, the total capitalization of the main stock market rose 6.2 percent on-month to 1,519 trillion won ($1.35 trillion) as of Wednesday, marking the highest monthly gain in more than five years.

Market watchers have offered mixed forecasts. Some predict the KOSPI to take a breather this month with investor attention shifting to the KOSDAQ market. Others say the main stock market will likely resume its upward momentum following a short period of correction.

Analysts warned the South Korean stock market is faced with such negatives as concerns over a possible impeachment of US President Donald Trump, China's financial instability and possible US rate hikes this month.

The Federal Reserve is scheduled to hold its policy meeting on June 14-15 amid expectations the US central bank will hike its benchmark lending rate for the second time this year. The Fed raised rates in March on economic optimism.

However, expected improvements in second-quarter earnings of top-cap Samsung Electronics Co. and other major companies are the most positive factor that may help the KOSPI keep its upward momentum.