The daily trading volume in the Seoul won-yuan direct market reached $1.55 billion in the January-May period, down from last year's daily average turnover of $1.95 billion, according to the data compiled by the Ministry of Strategy and Finance, and the Bank of Korea. 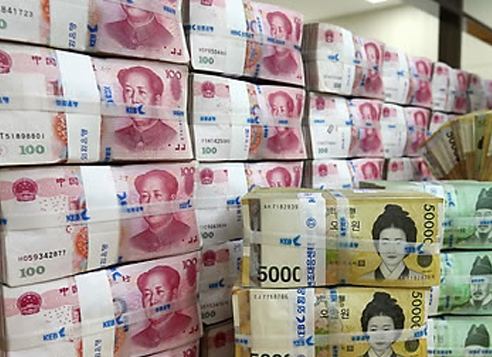 (Yonhap)
The turnover has been on a decline since it peaked at $2.27 billion at the end of 2015. The won-yuan direct market was launched in December 2014 in a way to boost bilateral trade between the two neighboring countries.

The volatility of the arbitrage rate between the two currencies was 0.38 percent in the January-May period, compared with 0.51 percent on-year, the data showed.

Over the same period, the corresponding numbers for the won-dollar rate marked 0.46 percent.

The ministry said that the decline in turnover came as local banks have been reluctant to use the direct trading market, although an increasing number of South Korean businesses use yuan to settle yuan-won accounts in trade instead of the US dollar.

Trade payments in the Chinese yuan took up 5.9 percent of the total Korea-China trade last year, up sharply from 3.1 percent in 2015 and 1.7 percent in 2014, with the rest paid in US dollars.