[ The Korea Herald – Send E-mail ]
[Herald Interview] ECCK chairman calls for deregulation
By Korea Herald
Published : May 31, 2017 - 15:39
Updated : May 31, 2017 - 17:19
Following the ouster of former President Park Geun-hye and the election of President Moon Jae-in, some foreign investors in Korea have heaved a sigh of relief in anticipation that the country’s economic instability during the turbulent political times will finally begin to normalize.

Foreign-invested firms make up 20.9 percent of the nation’s total exports and 5.7 percent of jobs. Of these firms, roughly 2,500 are European companies operating in Korea.

Dimitris Psillakis, president and CEO of Mercedes-Benz Korea, was named the new chairman of the European Chamber of Commerce in Korea in February. In his first few months in office, Psillakis said he is confident that the nation’s economy under President Moon will be promising. 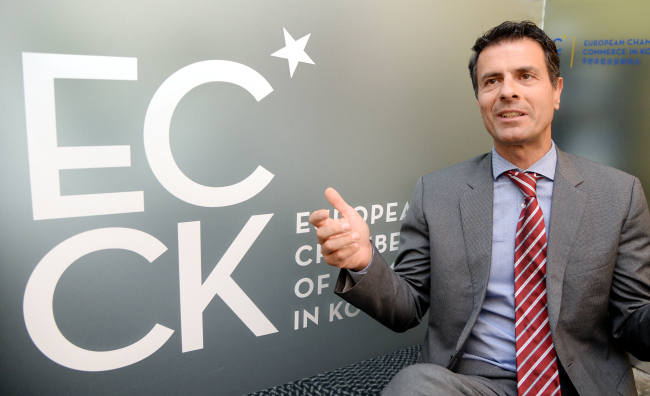 Dimitris Psillakis, ECCK chairman, president and CEO of Mercedes-Benz Korea, speaks during an interview with The Korea Herald in Seoul on Tuesday. (Park Hyun-koo/The Korea Herald)
“We have a new government and after a certain vacuum in Korea with the impeachment of the previous president and an election period, we are happy that there is a new leadership in Korea, and a very promising one,” said Psillakis, during an interview with The Korea Herald at the ECCK headquarters in Seoul on Tuesday.

“Taking into account the pledges of the now President Moon Jae-in, he took a very strong commitment to further open up the economy (beyond) free trade agreements, which are obviously operating fairly in terms of duties and taxation.”

ECCK is a nonprofit, nonpolitical organization of European companies operating in or related to Korea. It represents roughly 340 members striving to increase their presence in the world’s 11th-largest economy.

Based on statements made by Moon during his election campaign, Psillakis remains positive that the new administration will open up the Korean economy further and enact reforms to make the economy more competitive.

During a chambers of commerce meeting last month prior to his election, Moon vowed to actively support foreign investors and ease government regulations in order to boost the foreign direct investment rate to the national gross domestic product, which currently stands at less than half the average rate of Organization of Economic Cooperation and Development countries.

In an annual Business Confidence Survey conducted late last year by ECCK and Roland Berger, the majority of European businesses in Korea voiced concerns over the increasing difficulties of operating in Korea’s highly regulated business environment.

In a poll of 131 European executives, 60 percent said business in Korea had become more difficult due to the discretionary enforcement of regulations and unpredictable legislative environment.

The ECCK chairman said issues regarding extensive protectionism still remain as well as the issue with foreign direct investors in Korea. He is looking to the nation’s new leader to make good on his pledges to ease governmental regulations.

“Korea, with the ambition to export more, with the ambitions of leading future technology, it’s of paramount importance that standards are on the level of international standards,” he said, adding that opening up Korea will allow the country to expand its presence in Europe.

“I strongly believe that creating more equalization or normalization will create further opportunities for faster technological changes and would create more opportunities for gaining competitiveness,” said Psillakis. “Korean companies already have a competitive edge, so they don’t need any more protection.”