South Korea's exports to the group of Southeast Asian countries more than doubled over the last decade as commerce and investment increased following the implementation of a free trade deal, government data showed Wednesday.

Outbound shipments to the 10 member countries of the Association of Southeast Asian Nations reached US$74.52 billion in 2016, compared with $32.1 billion in 2006, according to the data by the Ministry of Trade, Industry and Energy. 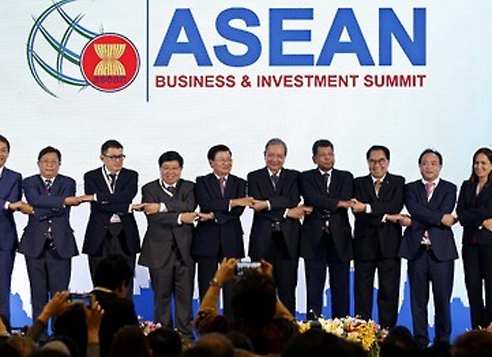 (Yonhap)
With the South Korea-ASEAN free trade deal taking effect in 2007, exports have grown an average 7.5 percent annually over the 10-year period, while Asia's fourth-largest economy saw its overall exports gain 3.3 percent every year in the cited period.

South Korea's imports expanded an annual 3.3 percent to $44.32 billion in 2016 over the past decade, with the surplus totaling $30.2 billion last year.

As a result, the total trade between South Korea and ASEAN increased 5.7 percent every year to $118.8 billion last year over the 2006-2016 period, accounting for 13.2 percent of the country's entire outbound shipments of $901.6 billion.

Investment by South Korean companies to ASEAN amounted to $6.4 billion in 2016, up from $3.7 billion tallied in 2006, while $2.5 billion worth of ASEAN-originated investment came to South Korea last year, surging from $703 million 10 years earlier.

"Over the past 10 years, ASEAN has become the second-largest trade partner for South Korea," the ministry said. "South Korea and ASEAN are making efforts to upgrade the 10-year old FTA to expand market openness and tariff cuts." (Yonhap)