“I know you have provided a lot of help in arranging inter-Korean summits for former Presidents Kim Dae-jung and Roh Moo-hyun,” Moon was quoted as saying in the talks at Cheong Wa Dae. “I think there would be a good result if you render help as before.”

Megawati positively responded to the offer, saying that, “Since South and North Korea are originally one nation, I think the Koreas should be reunited.” 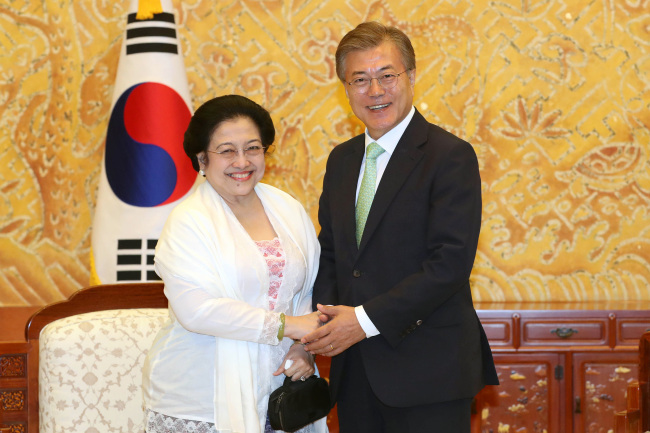 President Moon Jae-in (right) shakes hands with former Indonesian President Megawati Sukarnoputri at the presidential office on Monday. (Yonhap)
Megawati, however, said the Koreas need to employ various approaches such as social, cultural, educational, public health and economic, not just political, to improve relations. “Most of all, an economic approach would be the most effective in resolving problems between the two Koreas.”

She promised to push for a meeting with North Korean leader Kim Jong-un and asked if it is okay with him to convey his best regards when she comes to meet Kim. Moon, in response, said: “You may pass on everything from today’s meeting.”

During the one-hour meeting, Moon also called for Indonesia’s role in materializing his government’s plan to firm up bilateral relationship with the 10-member Association of Southeast Asian Nations “to the level of four major powers,” which are the United States, China, Japan and Russia. Megawati responded that she will deliver this to Indonesian President Joko Widodo. (Yonhap)