[ The Korea Herald – Send E-mail ]
Bank federation calls for fintech deregulation
By Son Ji-hyoung
Published : May 29, 2017 - 16:18
Updated : May 29, 2017 - 17:35
The Korea Federation of Banks on Monday called on the incoming policymakers to steer clear of a set of regulations that it said have deterred local banks from dealing with the environment shift in financial circles.

The banking federation suggested the new Moon Jae-in administration publicize fingerprints and ease regulation on servers for cloud computing and blockchain technology, based on which the federation said the banks would be able to pursue innovation.

“Privacy is important,” Ha Yung-ku, chairman of the federation, said in a press briefing Monday. “But excessive regulation that hampers banks from taking advantage of (technologies) should be normalized.” 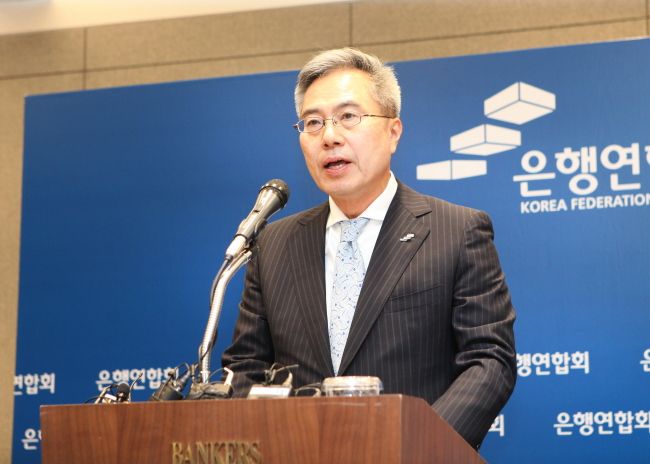 The KFB Chairman Ha Yung-ku (The Korea Federation of Banks)
The KFB also highlighted the need to lower the bar for nonbanking industry’s investment into banks.

“The line between banks and other finance-related industry is blurring,” Ha added in the federation headquarters in central Seoul. “Under the current law, the firms equipped with information and communication technology are having trouble operating internet-only banks.”

South Korea bans a nonbanking firm from owning more than 4 percent of shares in a bank to prevent the nonfinancial firm from using the bank as a private vault. The law revision, however, has long been considered crucial for online-only banks at the nascent stage in South Korea to maintain a sound financial condition.

“We are in need of a fresh model to cope with the shift in paradigm in the wake of the ‘fourth industrial revolution,’” he said.

“When banks can sell insurance and trade securities, they will no longer depend on the loan deposit margin,” he said, adding that otherwise the industry will be stuck in a vicious cycle.

The federation also discussed turning seniority-based salary system for bank employees into merit-based wage system, which Ha asserted will encourage banks to convert all its contract employees into permanent staff and help employees improve the quality of life.

“Achieving flexibility in the wage system is indispensable for offering quality jobs and a better work environment,” he said.

He stressed the role of policymakers in the startup financing system, saying startups should receive investment rather than loans.