The boy band, however, said its journey toward global stardom is just beginning, emphasizing that it will steadily build its own brand of music.

Speaking at a press conference at Lotte Hotel Seoul on Monday, Rap Monster of the group brushed off comparisons to Psy, whose wildly-popular “Gangnam Style” set the world on fire a few years ago. 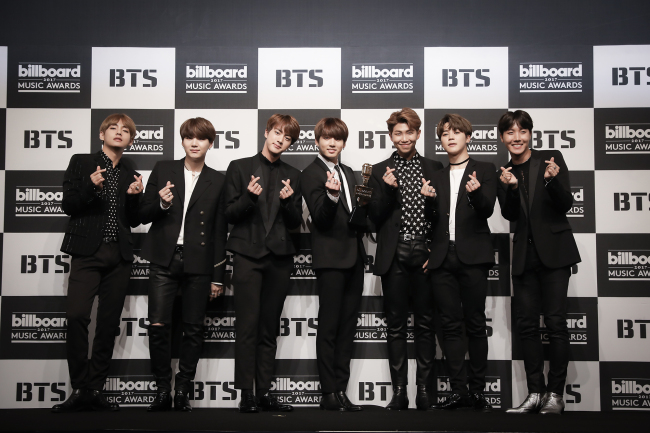 BTS poses for a photo before a press conference at Lotte Hotel Seoul on Monday. (Big hit Entertainment)
“We can’t really compare the scale of our success with Psy, whose music video dramatically turned the world upside down. We’re just taking baby steps, as our fan base is growing little by little,” he said.

Despite the rapper’s modest description, BTS’ success can hardly be described as small. It was named by Billboard Music Awards as the top social artist, edging out pop sensations such as Justin Bieber and Arianna Grande.

The award was handed out to the most popular artist on social media based on the big data analysis of various sites including Twitter, YouTube and Facebook.

Time magazine named BTS one of the best things about this year’s award show, saying that the group’s showing indicated that it was “poised to become one of K-pop’s first real stateside crossover successes.”

For the time being, however, the band was mostly contented with having been part of one of the most high profile award shows in the world.

“Celine Dion is one of my favorite singers and she actually invited us to join her show. We could not go because of our schedule, but it was such an honor,” said the starstruck V. 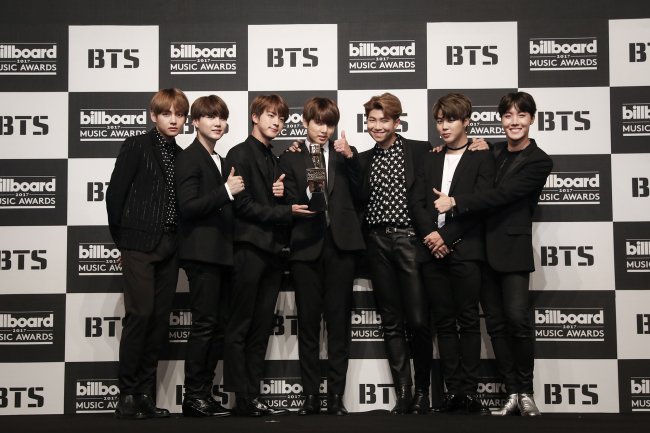 BTS poses for a photo before a press conference at Lotte Hotel Seoul on Monday. (Big hit Entertainment)
Suga said that the group had talked a lot with members of The Chainsmokers when they invited BTS members to a rehearsal.

The members expressed their hope to work together with world-renowned artists that they became acquainted with during the awards.

Members of BTS said they have big goals within their sight, but they will not be rushing.

“We always have high hopes, but we’re not hasty,” said Suga.

While many K-pop artists seek success in the US, the boy band said it does not have immediate plans for the US market.

“We’re Korean artists, so rapping and singing in Korean is, I think, the best way to express ourselves,” said Rap Monster. “We’re confident too that there is something that only we can accomplish.”

BTS on Monday embarked on a Japan tour. Last week, the group wrapped up its Asia-Australia tour.