The Financial Services Commission said its securities and futures commission made the decision Wednesday to impose massive fines on individuals for disrupting market order. This included the largest fine to be imposed on an individual, reaching as high as 1.34 billion won, since it first enacted the related regulation in July, 2015. The highest fine so far had been around 39 million imposed in a different case in December. 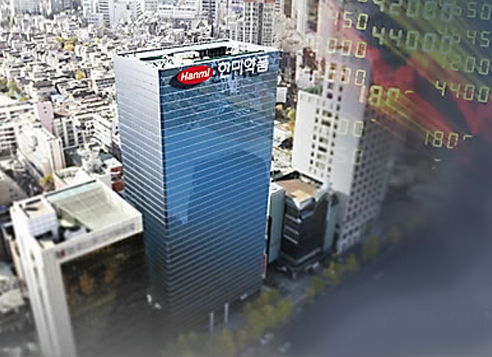 (Yonhap)
The FSC’s move is a follow-up measure after Seoul prosecutors found in December that 45 offenders, including Hanmi employees, had engaged in strategic stock transactions to reap illegal profits worth 3.3 billion won based on knowledge of undisclosed information about a deal’s collapse between Hanmi and Germany’s Boehringer Ingelheim.

Out of the 45, the prosecution had asked the FSC to investigate 25, who avoided indictment as second, third, fourth and fifth information receivers. Among the 25, 11 were exempt from the fine, the FSC said.

The undisclosed information also spread through school and hometown connections as well as families, it said.

On Sept. 30, Hanmi Pharm disclosed at 9:29 a.m. that its deal with Boehringer Ingelheim was broken. Its shares plunged after the announcement in massive short selling.

Short selling refers to a technique in which an investor borrows shares and immediately sells them, anticipating that the price will drop so he or she can buy them back at a lower price.

“There might be some worries in the market about stock trading based on what investors ‘hear.’ But only those who are in a position to be able to identify insider information will be subject to punishment,” an FSC official said.