The Kospi showed significant surge in the late morning trade. At around 11 a.m., the market index began to shoot up to around 2,320. The index hit intraday high of 2,326.57 in the afternoon trade, breaking the previous intraday record-high at 2,323.22 on May 10, when President Moon Jae-in took office. The index hovered around 2,320 until at around 2:45 p.m.

The rally came amid the latest bull ride that lasted for about a month. The top-tier market in South Korea saw 7 percent of monthly growth until Friday -- the highest in the world stock market indices. The Kospi outperformed France’s CAC 40, Nikkei of Japan and Hang Seng of Hong Kong, which rose 6.4, 6.3, 5.7 percent during the cited month respectively. 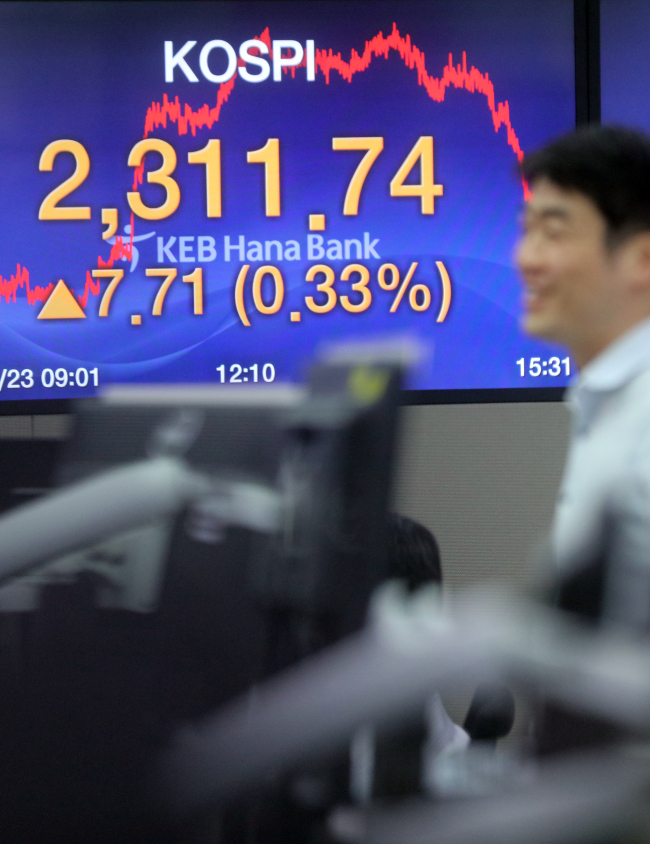 Energy firms led the rally in sync with the global market rally Monday fueled by the surge in oil prices as the Organization of the Petroleum Exporting Countries is expected to extend the output cut deal for nine months.

The rise bucked external uncertainties such as controversy surrounding US President Donald Trump, Greece‘s failure to secure a debt write-off deal with its European creditors as well as an explosion attack at a pop concert in the United Kingdom.

Despite persisting risks, South Korean stocks are projected to maintain at an “attractive level of valuation,” Hong Sung-bae, an analyst at NH Investment & Securities, wrote in a Tuesday report.

“It is more desirable to stick to the belief on gradual rise in stock index than to be cautious about excessive heating,” he wrote.

Local currency fell against the greenback. The Won was traded at 1,124.2 won, down 5.7 won, or 0.51 percent compared to Monday closing.