Household credit grew by 17.1 trillion won ($15.2 billion), or 11.1 percent on-year, in the first quarter, slowing in pace from a 20.6 trillion won gain in the same period a year earlier. Among the 17.1 trillion won, 8.4 trillion won loans were extended by banks, credit unions and mutual savings banks. The rest came from insurances, leasing firms and other financial institutions, the BOK said. 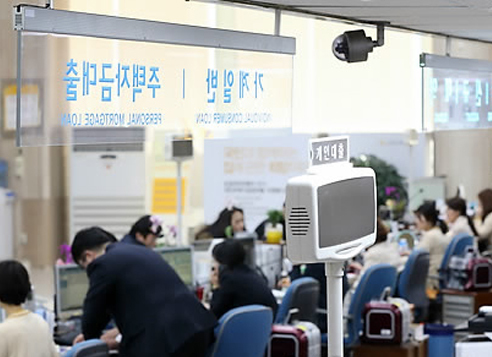 The latest quarterly household debt gain is a sharp decline, compared to the 46.1 trillion won growth in the fourth quarter.

“First-quarter data on household debt is seasonally lower than fourth-quarter one. But when comparing by year-on-year, the growth pace has slowed in the first quarter,” Moon So-sang, head of the BOK’s monetary and financial statistics team, said.

The BOK attributed the slower growth of household debt to the continued rise of lending rates and banks’ stricter management of household lending.

Despite the slower pace of growth, household debt is growing at a relatively faster pace, compared to 2013-2014 levels before the steep rise of household debt began in earnest with falling interest rates and a real estate market recovery, the Financial Services Commission said in a separate report.

The high level of household debt has been dragging the Korean economy, as heavier repayment burden on households reduce their disposable income, which leads to less private consumption.

To curb snowballing household debt, President Moon Jae-in has vowed to keep the debt-to-disposable income ratio under 150 percent. The BOK data shows that the ratio came to 153.6 percent as of the end of 2016.

The FSC said it is seeking to expand the debt service ratio, a gauge for an individual’s financial capabilities to borrow and repay loans, to curb the growth of household debt.

The IMF had said earlier this year that Korea should adopt stronger policy measures such as a gradual tightening of debt-to-income cap of 60 percent toward 30 to 50 percent.