The benchmark Korea Composite Stock Price Index added 15.55 points, or 0.68 percent, to 2,304.03. The Kospi had previously hit intra-day highs exceeding the 2,300 mark three times this year, but backtracked before the end of trading. 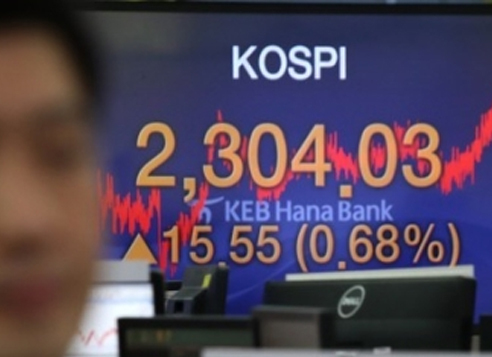 (Yonhap)
"Consumer sentiment has improved in the wake of the presidential election and the new government seems to have settled into its role in a smooth fashion," said Cho Ik-jae, an analyst at Hi Investment & Securities. "Stock prices have been moving up noticeably this year."

Analysts forecast the broad index to stay in a tight range between 2,350 and 2,400 this year on hopes of an extra budget being pushed forward by President Moon who has pledged to create more jobs and revive the economy that had posted weak growth in the past few years.

Also, South Korea's exports are expected to post the growth in near future amid improved global economic recovery.

"There is growing hope that the domestic market will greatly improve in the second quarter," said Kim Yong-gu, an analyst at Hana Financial Investment Co. "Also, the growing hope for new policies from the Moon government has positively affected the market."

While concerns remain that the local bourse may be overheated, some analysts said record low interest rates and the new government's economic policy drive will provide plenty of ingredients for a bull market going forward.

"There can still be some variables to the local market due to increased interest in stocks mainly because of a possible fall off in momentum following the end of earning season," Kim Hyong-ryul, a Kyobo Securities analyst. (Yonhap)