[ The Korea Herald – Send E-mail ]
AmCham meets White House officials
By Korea Herald
Published : May 21, 2017 - 13:58
Updated : May 21, 2017 - 17:16
Leaders of the American Chamber of Commerce in Korea recently concluded their senior-level “Doorknock” meetings in Washington, during which the delegation met with key officials of the Trump Administration, Congress and policy think tanks to discuss issues regarding Korea-US relations, according to a press release from AmCham on Sunday.

During their visit last week, AmCham officials held more than 50 meetings from Monday to Thursday with White House officials and congressional leaders. One of the biggest issues discussed during the high-level talks was the Trump administration’s new policies regarding Korea’s commercial and trading relationship with the US, considering President Donald Trump’s vow to renegotiate the Korea-US Free Trade Agreement. 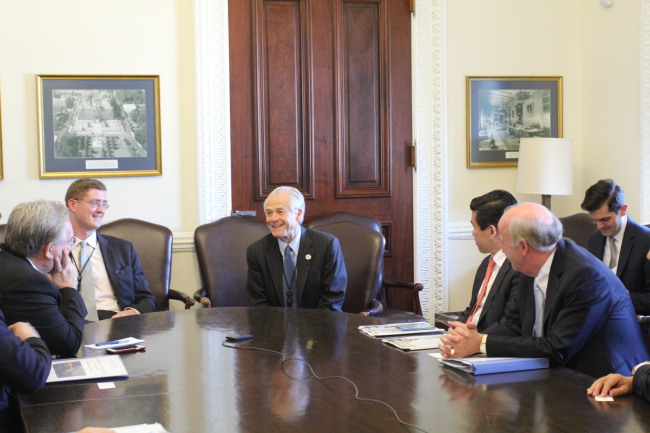 From left: Jeffrey Jones, foundation chairman of Partners for the Future Foundation and attorney at Kim & Chang; Alexander Gray, deputy director of the National Trade Council at the White House; Peter Navarro, director of the National Trade Council at the White House; James Kim, chairman of AmCham and president and CEO of GM Korea; and David Ruch, United Airlines country manager in Korea, speak during an AmCham “Doorknock” delegation meeting in Washington last week. (AMCHAM)
According to AmCham, the objective of this year’s meetings was to obtain a better understanding of the Trump administration’s direction for future trade policies with Korea and to ensure the administration and congress have a complete understanding of the depth of the US-Korea economic relationship and importance of the KORUS FTA.

Described by AmCham Chairman James Kim as a “vital” segment of the country’s economy, the KORUS FTA has reported an annual average of more than $65 million in exported goods from Korea to the US, since its enactment, according to the US Census Bureau.

For the first time this year, Hyundai Motors, a Korean member company of AmCham, joined the delegation to highlight to US leaders the contribution of Korea’s largest automaker to the US economy. This was also the first time the chamber of commerce had invited a Korean company to participate in its Doorknock delegation.

Hyundai Motor group representatives relayed to Washington officials the company’s investment of more than $10 billion in the US, which has led to the creation of more than 100,000 American jobs. Hyundai Motor also confirmed its plan to make further investments of $3.1 billion over the next few years.

“Among the four visits to Washington D.C. during my chairmanship, I think this year is the most critical and dynamic Doorknock,” said Chairman Kim. “Overall, this was another great success and we hope to go back to Korea and meet with President Moon before his trip to Washington D.C. to share what has been discussed during Doorknock.”