South Korean filmmaker Bong Joon-ho's "Okja" has premiered at the Cannes Film Festival with the filmmaker getting a four-minute standing ovation.

The new film from the "Snowpiercer" director tells the story of a young girl from a rural town who risks everything to prevent a multinational company from kidnapping her best friend, a super-pig named Okja. 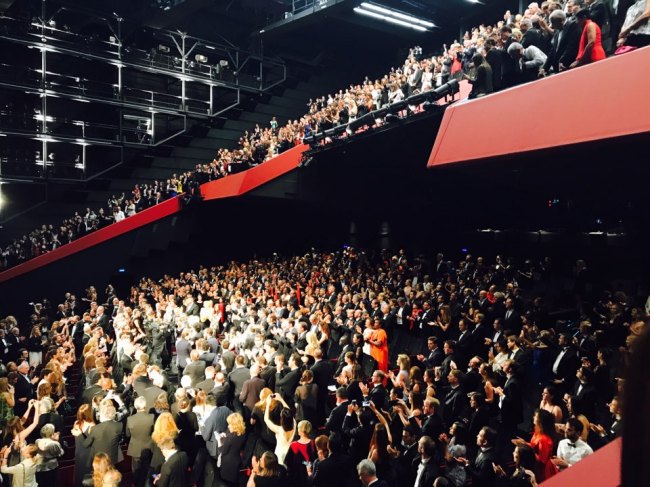 Thousands of movie fans gathered around the Lumiere Grand Theater in Cannes, France, to watch the director and the cast of the film one hour before the screening began there on Friday evening, an indication of their high anticipation of the latest film by the South Korean director.

When the audience in formal dress started to enter about 30 minutes before the screening, the theater's 2,000 seats were filled in an instant.

The movie's director and stars, including Tilda Swinton, Jake Gyllenhaal, Paul Dano, Byun Hee-bong and An Seo-hyun, stood together before a flurry of camera flashes on the red carpet before coming into the theater.

Thierry Fremaux, the executive director of the Cannes Film Festival, jury president Pedro Almodovar, and other jury members including Park Chan-wook and Jessica Chastain also sat together to watch the film.

The official screening was held in a relatively calm atmosphere compared to the media screening in the morning, which stopped briefly due to technical problems before being restarted.

When the lights were on, people on the first and second floors stood up and applauded at once. The standing ovation lasted about four minutes. Director Bong waved at the audience with excitement.

The audience response was relatively good. "It was impressive and fantastic," said Mark O'Leary of French distributor Lost Films.

"It was as good as Bong's previous work."

Other viewers said: "The rhythm and cast of the movie was good," and "It was a good movie that reminded us that we are responsible for food."

David, a Frenchman who introduced himself as a producer, said, "It is a movie with a big entertainment element, rather than a work with cinematic value." He showed some disappointment, saying it fell short of his high expectations for the film.

French Inter radio said, "The screenplay is captivating. 'Okja' is pleasant, poetic but not heavy at all."

The LA Times said "Okja" is a clever mix of humor and political thought with strong Bong-style sentiments.