[ The Korea Herald – Send E-mail ]
Nominee for FTC chief aims strict regulation on big 4 biz groups
Kim says curbing cross-shareholdings not a priority
By Korea Herald
Published : May 18, 2017 - 17:01
Updated : May 18, 2017 - 19:00
Kim Sang-jo, South Korea’s nominee for chief of the anti-trust watchdog, said on Thursday he would apply stricter fair trade laws to the four largest chaebol when he takes office.

Often called “chaebol sniper” for his longtime shareholder activism, the economics professor at Hansung University was the key economic adviser to President Moon Jae-in during his election campaign, mapping out Moon‘s key pledges on chaebol reform.

“The existing regulations were based on the same standards for all, for example, 60 business groups with assets of more than 5 trillion won, and 30 business groups with more than 10 trillion won in assets. Applying the same rules were ineffective on top groups and relatively excessive on lower groups,” Kim said at a press conference at the FTC Mediation Agency in central Seoul. 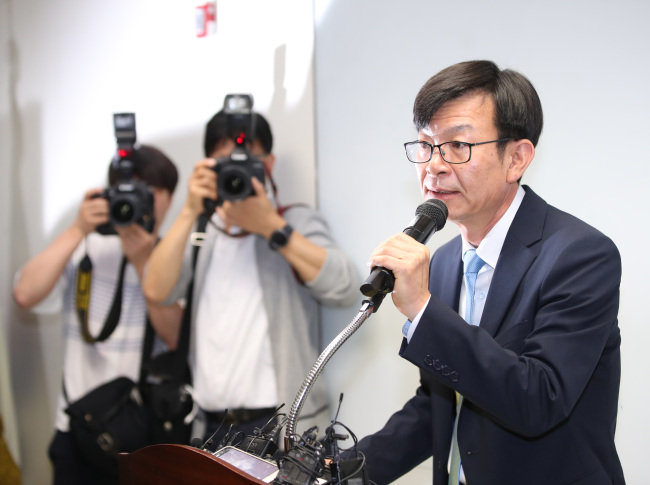 Kim Sang-jo speaks at a press conference at the FTC Mediation Agency in central Seoul on Thursday. (Yonhap)
“For now, I will sternly apply more strict laws on the four largest groups. I hope that the corporate sector could voluntarily change in the new environment.”

The four largest conglomerates are Samsung, Hyundai Motor, SK and LG. Their assets account for half of the assets of the 30 largest business groups in Korea.

Korea’s family-owned conglomerates are often criticized for their unfair deals with sub-contractors and small- and medium-sized enterprises. Chaebol’s funneling contracts and business orders to their affiliates is also under regulation for concerns of damaging fair competition against SMEs.

To better monitor such occurrences, Kim said he will enlarge the FTC’s current “business group division” to ”business group bureau.” The change in the FTC’s structure, which also needs consultation with the Ministry of the Interior, is similar to Moon’s pledge to revive the FTC’s investigation bureau, Kim said. 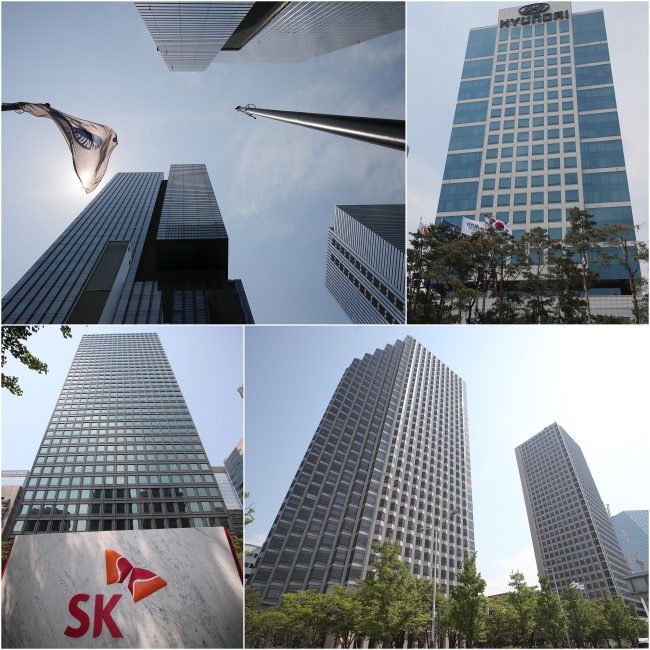 Samsung Electronics (from left), Hyundai Motor, LG and SK headquarters (Yonhap)
Cutting the complex cross-shareholdings at conglomerates, another tool for chaebol reform, is not an urgent issue and that was why it was taken out from the 10 major pledges of Moon, he said.

“Five years ago, there were 98,000 shareholding connections under 14 groups, and 95,000 among them came from Lotte. Now, the number has shrank to 90 connections under seven groups. Among these, Hyundai Motor is the only group that the cross-shareholdings are related to the family owner’s control,” Kim said.

“To regulate this, we need a law revision, which needs a parliamentary agreement. Considering the benefits and the costs, cutting the cross-shareholdings is not urgent.”

Kim also vowed to scrap the FTC’s long-held exclusive right to charge businesses for fair trade violations but made sure to discuss further with FTC officials to which degree the FTC should push the reform.

The current law prevents prosecutors from indicting companies for competition law violations unless the Fair Trade Commission files an accusation. Only several other entities -- the Board of Audit and Inspection, Public Procurement Service and the Small and Medium Business Administration -- can request the FTC to file a case with the prosecution.