In an industry that has heavily relied on high-rollers and VIPs to account for the vast majority of its revenue, Macau’s gaming heads are looking to establish a more mass market tourism appeal and nongaming amenities to revitalize its economic turnaround.

According to Steve Gallaway, a managing partner at Global Market Advisors and featured G2E speaker, the convergence of gaming and nongaming has evolved to a level of critical importance across the casino industry worldwide. Global Market Advisors is an international gaming, tourism and hospitality consulting firm.

In the case of Macau, Gallaway said Asia’s sin city must drastically improve its entertainment sector if it is looking to become more than just a day-trip gaming itinerary.

“Good entertainment drives people to your destination,” said Gallaway, during an interview with The Korea Herald at Venetian Macau on Wednesday. 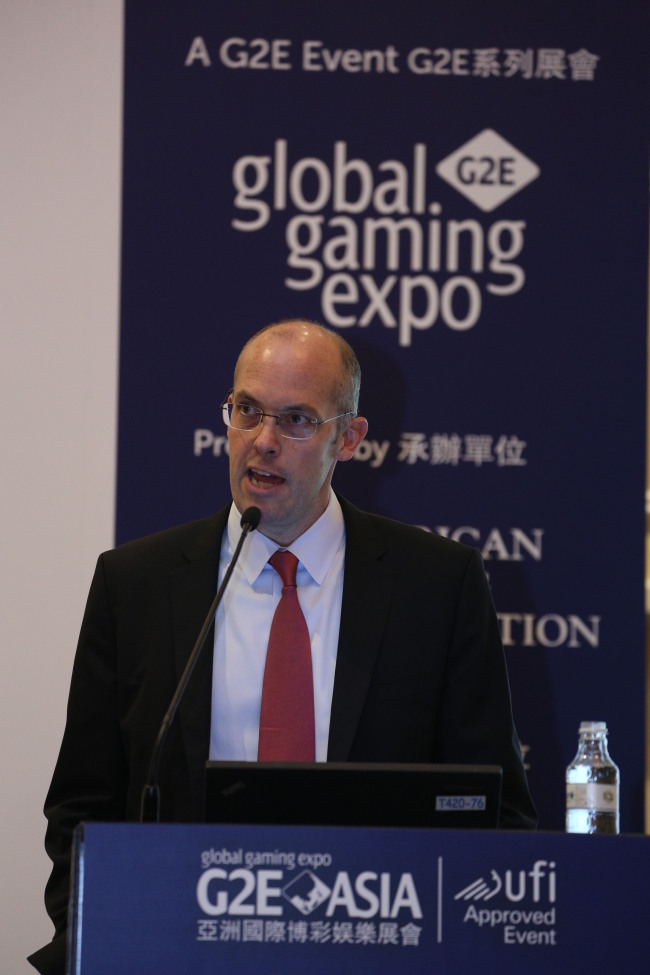 Steve Gallaway, managing partner at Global Market Advisors, speaks at the Global Gaming Expo Asia held at Venetian Macau on Wednesday. (MM Marketing Communications Consulting)
“If you look around, there is no shortage of retail shops … but what Macau needs is more shows if it wants to draw in more nongaming crowds,” said the expert on gaming market assessments, hotel and casino feasibility studies, operational reviews and marketing analysis.

“The No. 1 thing that Macau needs right now is time,” he continued. “The Chinese government was very clear giving its directive that it must increase its nongaming revenue.”

Gallaway, however, warned that although nongaming amenities such as increased live performance and other tourist highlights are important, nongaming should not translate to family friendly. Describing Las Vegas’ past attempt to advertise the city as a family destination a “miserable failure,” Gallaway said Macau cannot lose sight of its core as a nightlife, adult-travel destination.

“You are not going to see operators wanting to try to make Macau a family destination. It just doesn’t work,” he said, adding that while attractions such as amusement rides may be built in Macau in the future, the move would be more to appease the government as opposed to a true business strategy.

“We know night clubs are very popular in Asia, but they haven’t quite made it to Macau yet,” he said. “I don’t know why, but I suspect that they will.”

While some industry insiders have cited Macau’s intense reliance on VIP guests as the main reason for its recent fiscal downfalls, Gallaway is still firm in his stance that high-rollers are crucial to the financial success of the gaming market and that the hospitality industry cannot over look this fact.

“You built the resort, it cost billions of dollars to build … you are going to focus on all of your guests, but you have to focus on the ones who are the most valuable,” he said. “So if I’m an operator, I’m focusing on my VIPs … it just doesn’t make any sense not to.”

As for Korea’s gaming market, Gallaway said that the country must open up its door to locals before it can ever become a true contender in Asia’s rapidly growing casino market.

Unlike other players in Asia’s gaming industry, Korea still maintains a foreigners-only casino policy, which Gallaway refers to as a “big mistake.”

With the recent opening of Incheon’s Paradise City last month, Korea is also on the road to increasing its presence in Asia’s burgeoning gaming industry. Paradise City is East Asia’s first integrated resort and is the first of a cluster of casino resorts that is set to be developed on Incheon’s Yeongjong Island.

“I cannot think of a foreigner-only resort that has been successful in the past,” he said. To me, it’s risky if you have to rely on the Chinese junket market for success.”