The daily foreign exchange turnover by local and foreign banks in South Korea rose 11.9 percent in the first quarter from the previous quarter, the central bank said Wednesday.

The daily FX turnover averaged $49.98 billion in the January to March period, compared to the previous quarter's $44.66 billion, according to the Bank of Korea. 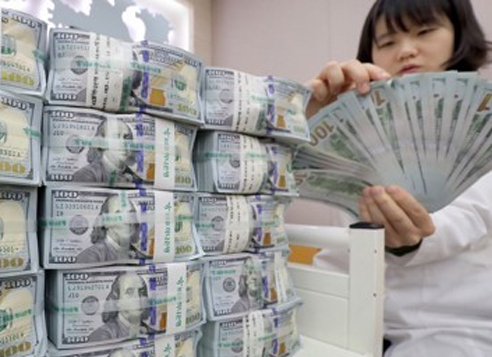 (Yonhap)
The daily trading volume of foreign exchange spots reached $19.41 billion in the first quarter, up 11.8 percent from the previous quarter.

By currency type, the daily dollar-won trading volume rose 7 percent to $14.08 billion while the daily turnover for the won-yuan increased 17.1 percent to $1.62 billion during the cited period.

South Korea and China launched a direct exchange market for their currencies in December 2014.

The daily foreign exchange derivatives turnover averaged $30.58 billion in the first quarter, up 12 percent from a quarter earlier, according to the BOK. (Yonhap)