Previously, each year the Korean unit of the New York-based bank converted the contract employees into permanent positions through a set of screening processes, which accounted for one-fifth of the newly employed full-timers.

The bank, however, has not determined the exact date of the transition or plans to hire new bank tellers in permanent positions.

The decision by Park Jin-hei, chief of Citibank Korea, marks the financial circle‘s first move since President Moon Jae-in took office last week. Moon has vowed to reduce the number of contract workers across the industry at home, a move intended to improve the quality of employee welfare. 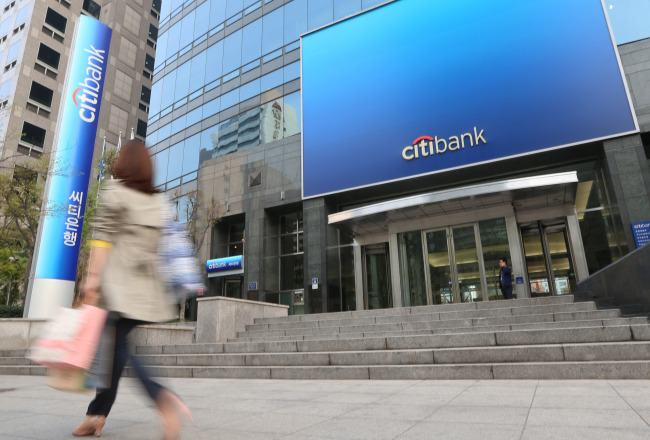 (Herald DB)
Park’s announcement Tuesday came amid a lingering labor-management conflict, which originates from controversy surrounding the bank‘s decision to slash local brick-and-mortar consumer bank branches nationwide in South Korea -- from 126 to 25, plus seven branches for corporates -- to seek digitization.

Representatives from the bank’s management and its labor union failed to reach a resolution in three labor talks in May, including the latest Monday. The labor union has called for the unconditional conversion of all contract workers into full-time employees as well as a salary hike. It also called on the bank to maintain the number of branches at above 100.

Commercial banks in South Korea have long moved to reduce the proportion of contract bank tellers.

Woori Bank in March 2007 turned some 3,000 contract positions -- mostly bank tellers -- into regular ones. This came months after the lawmakers passed the Act on the Protection, Etc. of Fixed-Term and Part-Time Workers, which obliges a corporation with more than 100 employees to turn contract workers into regular workers within two years of service.

Many other commercial banks, such as Shinhan Bank, Kookmin Bank and KEB Hana Bank, followed suit in between 2014 and 2015.

The state-run Industrial Bank of Korea has made its way to transforming some 3,800 unlimited term contract workers into permanent staff. A separate in-house team in charge of the transition was launched in June 2016.