The reprimand came after McMaster called his South Korean counterpart, Kim Kwan-jin, and assured him that Trump's demand for Seoul to pay for the $1 billion missile defense system was not official policy, Bloomberg reported, citing unidentified White House officials. 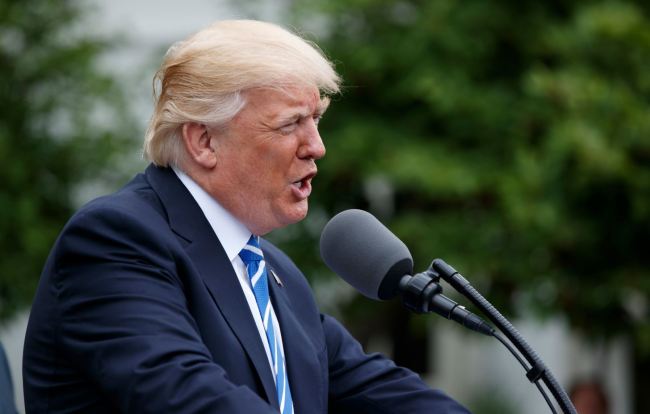 (Yonhap)
After reading the story in a newspaper, Trump "screamed at McMaster on a phone call, accusing him of undercutting efforts to get South Korea to pay its fair share," Bloomberg reported.

Trump has also complained in front of McMaster during intelligence briefings about "the general undermining my policy," the report said.

It said Trump has given McMaster less face time and McMaster's requests to brief him before some press interviews have been declined. McMaster was not in attendance when Trump met with Australia's prime minister over the weekend, the report said.

"When you look at the president's schedule this week ... there's probably no one, aside from family members, that are spending more time with the president this week than General McMaster," Spicer said.

"He values his counsel. He continues to be extremely pleased with his pick and his performance as national security adviser. And he has the utmost confidence in him."

Trump first made the THAAD demand in an interview with Reuters late last month, even though the demand runs counter to an agreement under which the US pays for the system while the South agrees to the deployment and provides land.

South Korea immediately rejected the demand, but Trump insisted in an interview with the Washington Times the following day that he believes "it would be appropriate if they paid for it."

The demand has rattled an ally trying to work together with the US to tackle the growing nuclear and missile threats from the North. Many South Koreans expressed anger and bewilderment, raising calls for scrapping the deployment altogether.

The office of South Korea's national security adviser said after a phone call with McMaster that the US promised to abide by the existing agreement, but McMaster later gave a different account, saying that what he said during the call was that the US will stick to the agreement "until any renegotiation." (Yonhap)