At an annual gathering of the Asian Development Bank in Yokohama, Japan, on Saturday, South Korean Finance Minister Yoo Il-ho also said Asian countries should raise their guard against short-term downside risk in order to regain their recovery momentum. 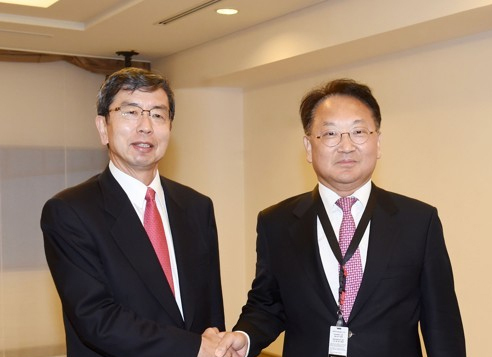 In this photo provided by South Korea's finance ministry, South Korean Finance Minister Yoo Il-ho (right) shakes hands with Asian Development Bank (ADB) President Takehiko Nakao before their bilateral meeting on the sidelines of the ADB annual meeting in Yokohama, Japan, on May 6, 2017. (Yonhap)
"We need to take stern measures against unfair trade practices, which will help the free trade system work," Yoo said. "We need to focus on policies under which benefits stemming from economic integration and free trade can be shared with the underprivileged."

On Friday, South Korea, Japan and China vowed to fight against "all forms of protectionism" amid growing concerns of US President Donald Trump's protectionist policies.

The pledge came after a meeting of senior financial officials and central bankers of the three countries on the sidelines of the ADB annual gathering that runs through Sunday.

The Northeast Asian powers agreed that "trade is one of the most important engines of economic growth and development," the joint statement said.

They "will resist all forms of protectionism," it said. They also agreed to step up cooperation in the face of lingering uncertainties in the global economy and geopolitical risks.

The South Korean economy, Asia's fourth largest, has been showing some modest signs of recovery thanks to brisk exports and investment, but the momentum still remains weak due to flaccid private consumption.

The ADB's annual meeting hosts about 6,000 government officials, academics, business officers and civil society representatives under the theme "Building Together the Prosperity of Asia." The annual meeting is also a celebration of the ADB's 50 years of development work in Asia and the Pacific region. (Yonhap)