The Bank of Korea said Sunday that despite US President Donald Trump celebrating his first 100 days in the White House, uncertainties over his policies have grown and are causing jitters.

Citing concerns about Trump's protectionist moves, legal challenges over his anti-immigration policy and a revamped healthcare plan, the central bank urged Asia's fourth-largest economy to strengthen its monitoring on policies being pursued in the world's No. 1 economy. 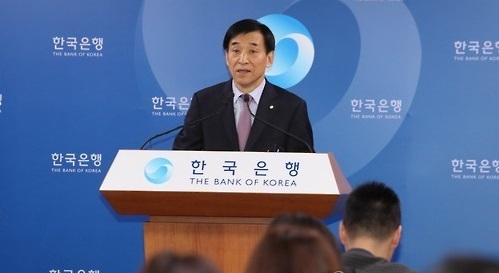 (Yonhap)
In an interview with Reuters last week, Trump said he will renegotiate or scrap a bilateral free trade deal with South Korea and wants South Korea to pay the cost of an advanced US missile defense system in South Korea.

"The policies of the Trump administration are in a period of transition, lacking substantiation," the BOK said in a report.

Underscoring challenging issues such as North Korea's pursuit of nuclear weapons and missiles and trade, the central bank urged South Korea to actively present and make known its interests during the current transition period. (Yonhap)