On Friday, 20 of the party’s 33 lawmakers released a statement calling for three presidential candidates-- Yoo, Liberty Korea Party’s Hong Joon-pyo and Ahn Cheol-soo of People’s Party -- to form an alliance to stop front-runner Moon Jae-in of the Democratic Party of Korea. 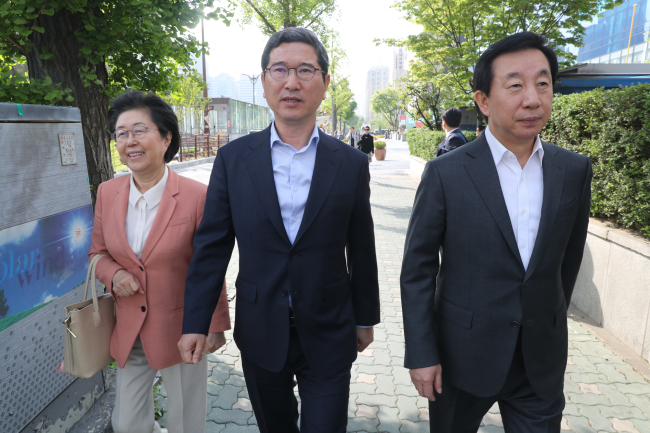 Bareun Party’s Reps. Kim Sung-tae (right), Kim Hack-yong (center) and Lee Eun-jae head to the National Assembly after an early morning meeting calling for the party’s presidential candidate Yoo Seung-min to merge his campaign with centrist and conservative candidates Friday. Later in the day, Lee left the party to join the Liberty Korea Party. (Yonhap)
“We should not make the error of passing the future of South Korea to the liberal hegemony blinded by self-righteousness,” the statement read.

“If the leader refuses the ‘people’s call’ for a coalition, it would leave an indelible stain in Korean history by letting the left wing seize power.”

The statement added that “a sincere leader should be able to sacrifice for a bigger cause.”

One of the lawmakers who did not reveal his name but signed the statement said they are making last-ditch efforts to stop the next administration from being taken over by the liberal faction, as “Yoo does not hold much chance of winning the presidential office.”

Later on Friday, Rep. Lee Eun-jae of the Bareun Party announced she would leave the party to join the Liberty Korea Party.

The hard-line conservative Liberty Korea Party welcomed Lee’s move and said it was the start of the “grand unification of the conservatives.” The two parties split from the Saenuri Party following the scandal involving former President Park Geun-hye.

The statement follows Monday’s meeting, during which Yoo and other party members clashed on forming a coalition with the other parties.

Despite calls from his own party, Yoo appears determined to finish the race without uniting with other candidates.

“I do not think it is right of my own party to shake off the candidate they have democratically chosen. If the members do not want to campaign, they should at least leave me alone. I will hold my ground and represent my party,” Yoo said, after a meeting with apartment guards early Friday.

Hong of the Liberty Korea Party, however, criticized the Bareun Party on Friday for making “exorbitant demands” by telling him to quit and support Yoo when the alliance is formed.

“I have met with some of the lawmakers because they ask to build a conservative coalition. However, I am lost for words at their demands,” read his Facebook post. “I cannot waste any more time on them. I will only look and campaign for the citizens.”

Yoo is currently the last candidate among the five party-backed candidates, posting support of 4 percent in a latest poll by Gallup. Hong was third in support with 12 percent.